Back Onboard SY Aspen in Grenada 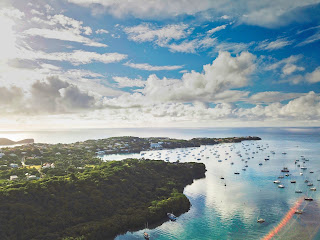 Drone picture of Prickly Bay, Grenada where Aspen was stored at Spice Island Boatyard for hurricane season.  Some sailors spend hurricane season on their boats in the water here, as you can see. 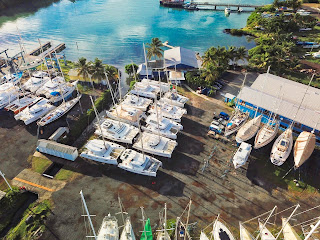 A drone picture showing part of Spice Island Boatyard, Grenada.  Our friends catamaran Cat Tales (Dawn and Laurie) is the little catamaran in the center close to the water. 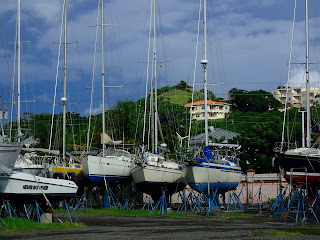 Aspen nestled among other sailboats at Spice Island Boatyard, Grenada.  It is a close fit. 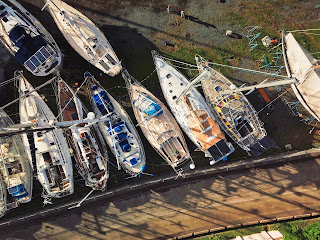 A drone picture of Aspen at Spice Island Boatyard, Grenada.  Aspen has the shredded blue cover partially covering the dinghy in the center of the picture. 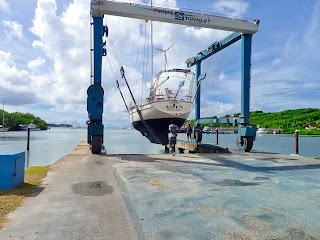 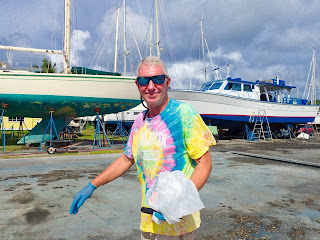 Captain Steve applying the last of the bottom paint before Aspen was launched.  Love the smell of bottom paint in the morning! 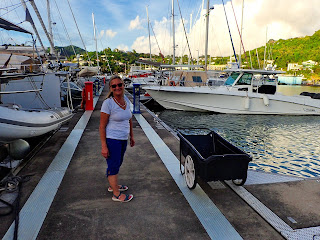 Port Louis Marina, Grenada and the 220 volt dock.  Very few North American boats use this dock because the power is European.  Aspen can use both types power (220 volt or 110 volt)! 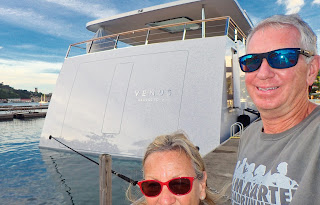 "Venus", our neighbor in Port Louis, Grenada marina.  No, we were not invited onboard for dinner or drinks, unfortunately. 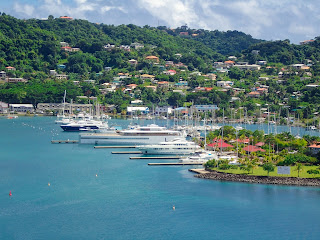 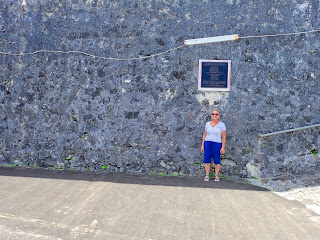 The wall inside Fort George, Grenada where Prime Minister Maurice Bishop and fifteen of his government were lined up and executed by firing squad on October 19, 1983.  A leftist coup took over the reins of government, supported by Fidel Castro of Cuba.  The response by the United States resulted in the Grenada Invasion/Operation Urgent Fury. 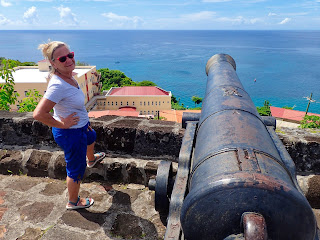 Looking west from Fort George, Grenada with an unloaded cannon 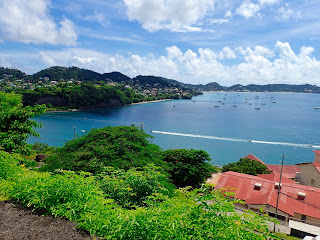 St. George's, Grenada anchorage area and channel into the harbour 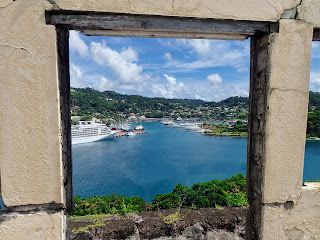 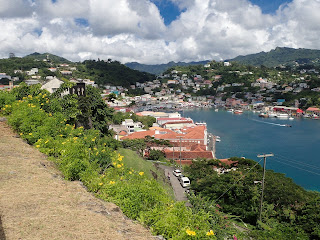 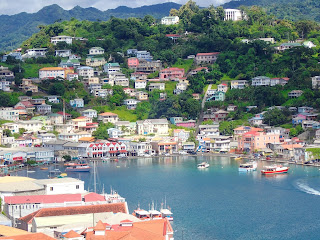 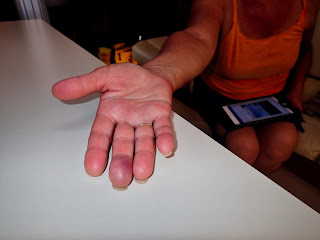 Ah yes, Aspen is floating again in the southern Caribbean.

After launching Aspen, we motored to the other side of the island and found a berth in Port Louis Marina.  Now we can put Aspen back together for another cruising season.

First on the list was the dreaded head (bathroom).  Admiral Maria announced that nothing was going down the toilet, oh joy.  Well, she didn’t use the “oh joy” remark, that was me.

Sticking our heads up for a breath of fresh air, we saw our neighbor - the mega yacht Venus.  Remember, Steve Jobs of Apple fame designed her but she was never completed before he died.  Now his wife likes taking Venus for a spin, wherever she has a desire to go someplace fun.

After a couple hours fixing the toilet, it was time to lift our 100 pound outboard engine and bring it to the stern of the boat.  Luckily Captain Steve has been lifting weights all summer (doesn’t it show?) so without too many rest stops he managed to get the engine onto the stern of Aspen.

Aspen has a nice bracket to rest the engine.  Unfortunately Maria’s middle finger happened to be in the way of the bracket where the mighty beast of an engine was hurled (again by Captain Steve) and that outcome was NOT as planned.

There was an ear piercing scream from Maria followed by some other colorful remarks directed towards Steve by the admiral.  The entire marina was well aware that something was happening and it wasn’t the captain beating his crew.

Sailing friends are arriving daily from the frigid northerly climates and doing the same thing we are - working on their boats of course.

Is it hot here?  Well, 86 degrees F is pretty warm especially without air conditioning.  But our blood will thicken quickly, or so we hope.

Also, our book, Voyage Into Hell, is available at Amazon.com
Posted by Aspen at 6:58 PM 1 comment: