Another Day in the Caribbean; Onboard Aspen 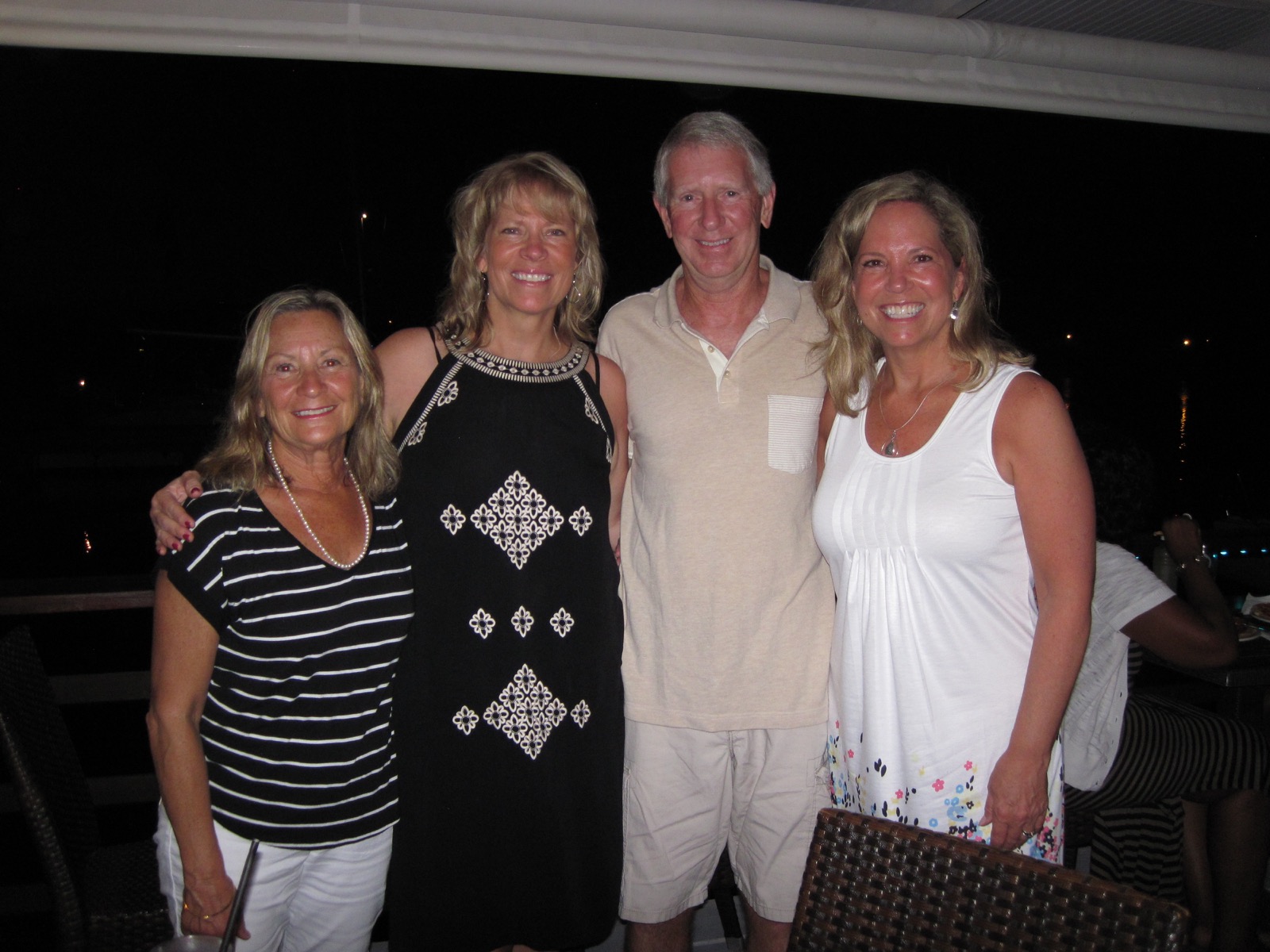 Friends Vicki and Suzanne from Colorado came to have dinner with us in Antigua.  It was great fun seeing them! 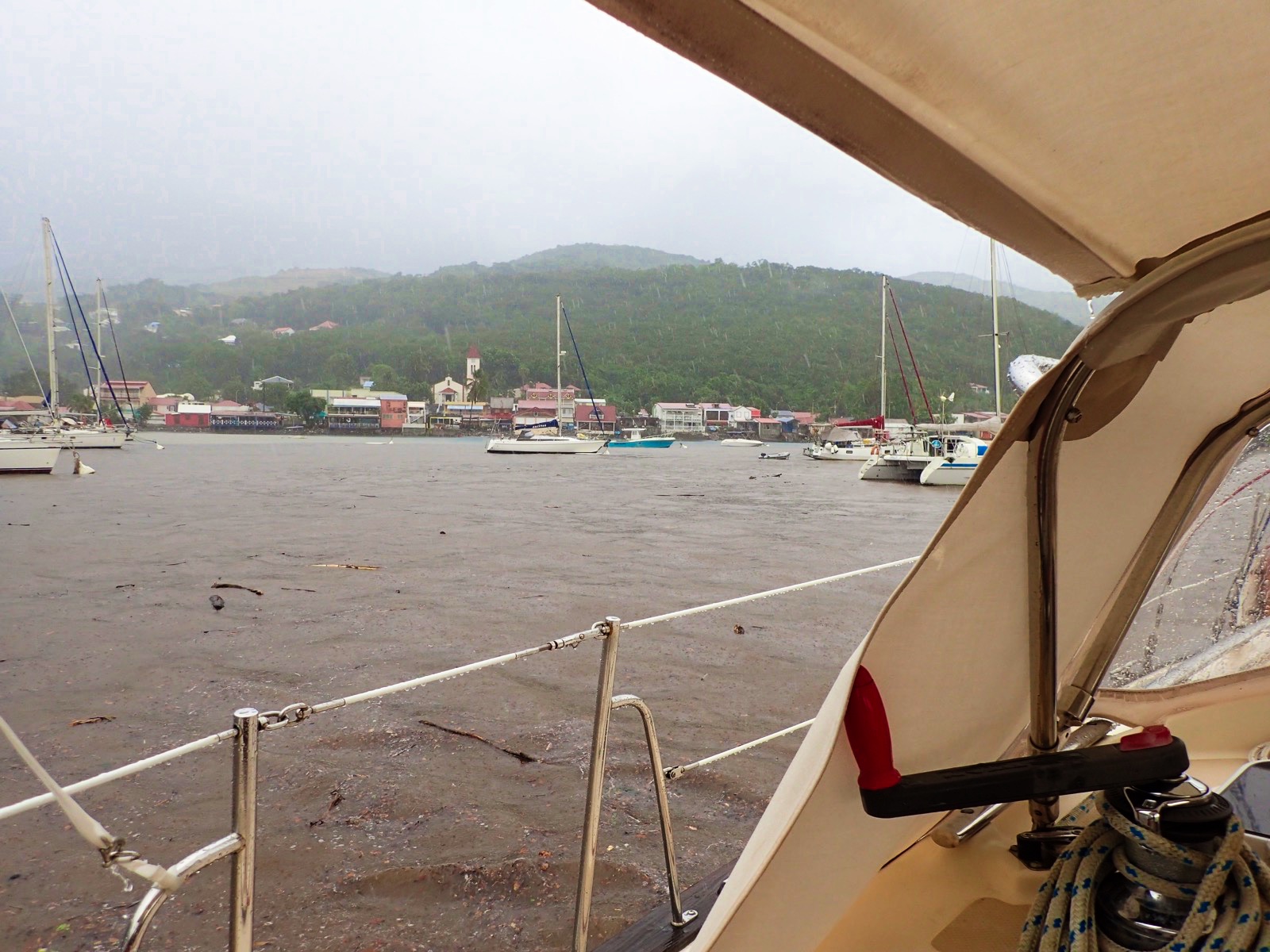 Deshais, Guadeloupe after the torrential tropical downpour.  It is a river of debris and mud in the harbor! 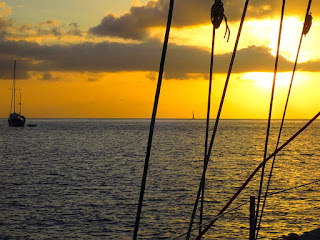 Just another great sunset over the Caribbean Sea in Guadeloupe. 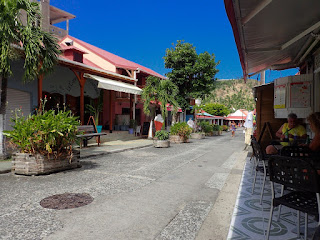 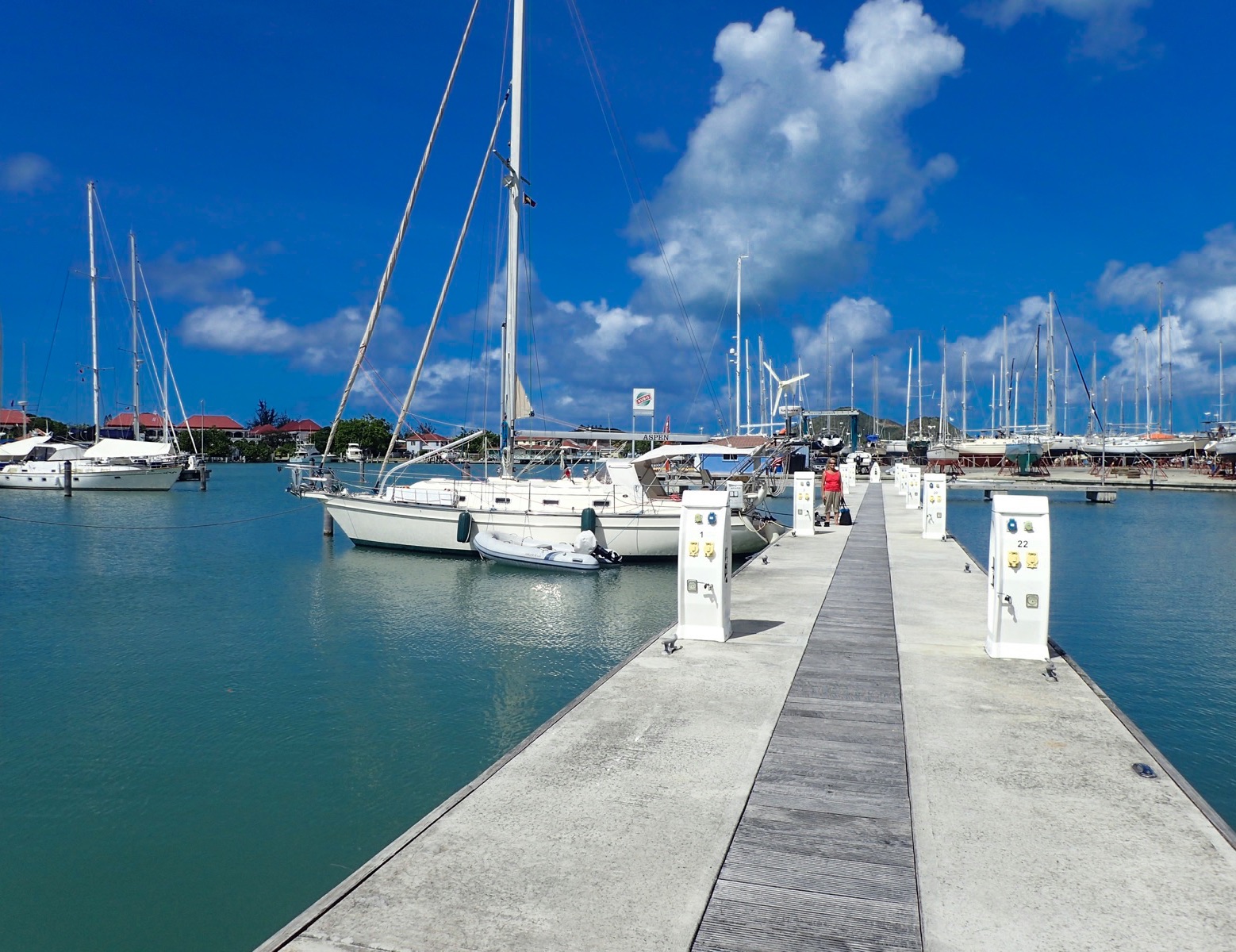 Jolly Harbour Marina dock and Aspen is very lonely sitting by herself.  It is low season so not many boats have been launched yet. 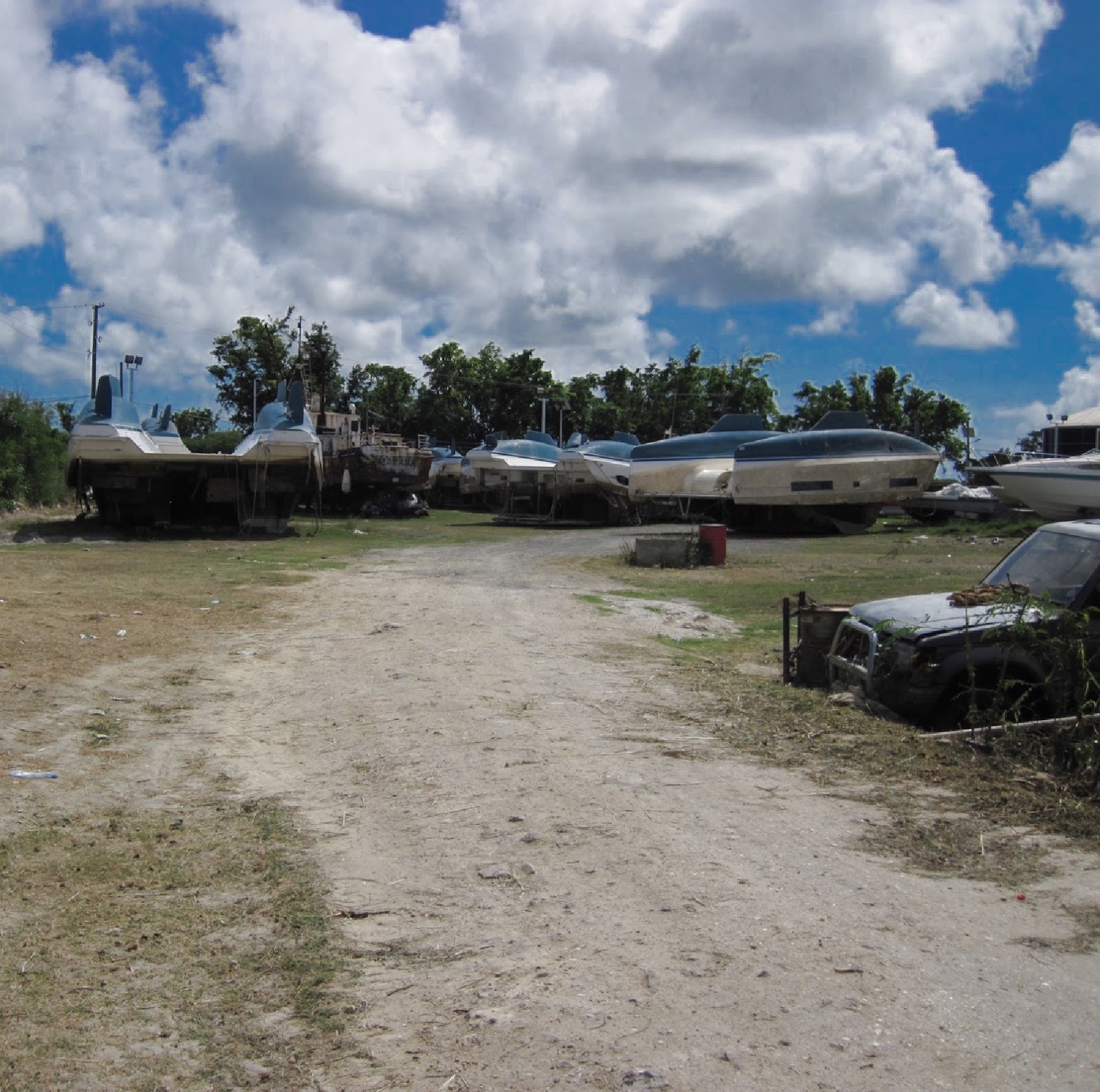 North Sound Marina, Antigua where the hurricane damaged boats from St. Maarten and the BVI's have come to rest.  So sad. 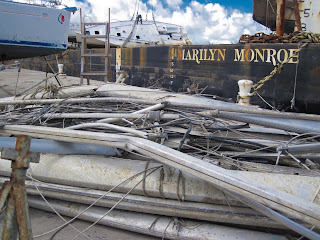 The barge Marilyn Monroe was the transport for all the damaged sailboats and masts from the hurricane damaged boats. 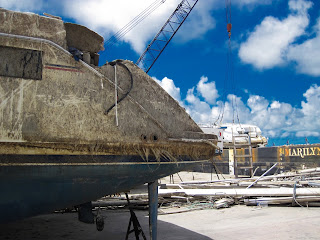 This is what happens to a boat sitting at the bottom in Oyster Pond, St. Martin looks like.  Ugggg! 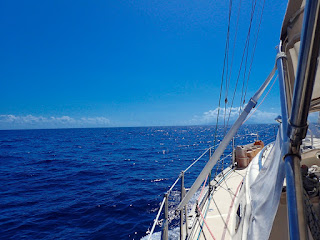 Guadeloupe is on the horizon! 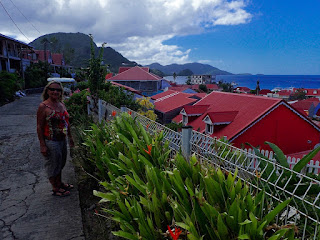 Pretty view of Iles des Saint, Guadeloupe and the red roofs of the main town. 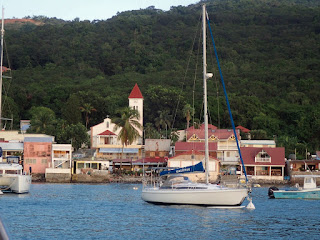 Scenic waterfront of Deshais, Guadeloupe with one of the rare mooring balls being used! 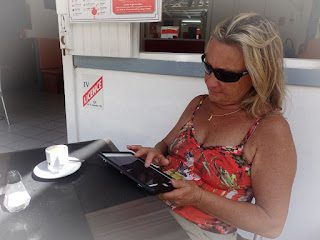 Maria getting caught up on news with a WIFI connection in the Saints. 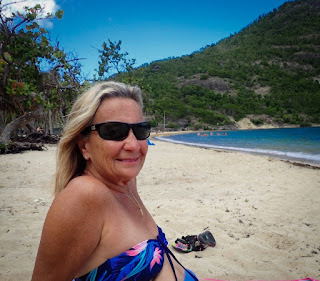 The best beach in Iles des Saints.  It is getting cleaned up after hurricane damage by the French military who are camped behind the beach.  Now that must be a tough assignment! 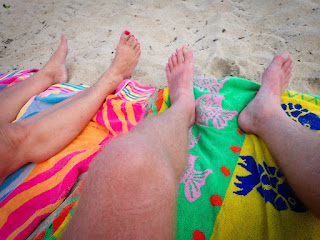 Toes in the sand in Iles des Saints 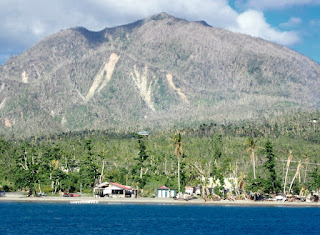 Dominica, our favorite island in the Caribbean was hit by category 5 hurricane Maria and the lush vegetation was laid bare, as you can see.  Landslide scars litter the hillsides that have never been seen before because of all the trees that used to cover the slopes.

Leaving Antigua we had a no-wind motorsail to Deshais, Guadeloupe where we got very lucky in finding a vacant free mooring ball on our arrival.  Finding a mooring in the bay is never easy but since it is so early in the sailing season, several mooring balls were empty so we grabbed one.  Anchoring in Deshais is usually a challenge because the bottom is poor holding and boats drag into one another all the time.  At least on a mooring we should stay in one place as Aspen does circles around the ball with the constant winds shifts at Deshais.

Just as we arrived in Deshais, the heavens opened up and a monster tropical deluge engulfed the anchored boats for three straight hours.  The rain was so heavy it filled the streams that empty into the bay and brought large trees in a tidal bore that engulfed Aspen and everyone else in the anchorage.  The pretty blue water turned a sad shade of black from all the sediment carried by the rivers into our bay.

Because of all the debris and mud, we decided to stay on Aspen and not go ashore until the next day!

Of course the next day was a Sunday and nearly everything in town was closed except a few restaurants.  Customs was supposed to be closed but was open for about an hour, enabling us to check into Guadeloupe.  The owner was using his wifi to update his computer operating system and the computer had locked up, much to his dismay.  So just as we finished checking in, the owner locked his door and went home.

Our next stop in Guadeloupe was Iles des Saints - a spectacular little group of islands that belong to Guadeloupe.  The French love to vacation in the Saints and we joined them of course.

While anchored in Iles des Saints we tried to get our trusty water maker working.  Well that was a complete failure.  No amount of coaxing by Captain Steve persuaded the non-functional machine to give up a drop of water.  So Admiral Maria took over and wasn’t as nice with her fury aimed at the dead piece of steel.

So, we can’t make water and that is a problem as you might guess.  Luckily we found out that water can be purchased at the main dock:  1 Euro for 100 liters (26 gallons).  What a deal!

The only problem is that you can either bring your nice boat against the gooey black rubber tires and fenders on the big dock and be bashed by the constant swell or put the water into your 5 gallon jugs and dinghy the containers back and forth between the dock and Aspen.

Well, there was one other problem.  Aspen only has 1-five gallon container for water (who would think our water maker would quit???).  And we needed a lot of water.

Luckily we met another Island Packet sailboat in the bay who was on a mooring ball right beside us and the owner, Skip, offered us his 3 - jerry jugs to use.  Instead of 15 trips back and forth to the water tap on the main dock, we only needed 4 round trips with our dinghy.

Admiral Maria and Captain Steve loaded 600 pounds of water into Aspen’s tank over the course of 2 hours.  What a job that was!

Once Aspen’s water tank was full we needed a beach break.  The best beach on the island was a 20 minute walk away so off we went to lie in the sand and enjoy the warm Caribbean Sea and abundant sunshine.  Isn’t that was sailing is all about?

With a full water tank we sailed south to Portsmouth, Dominica.  As many of you recall, Dominica was destroyed by hurricane Maria in September of this year (2017).  The category 5 hurricane had a bullseye at the center of pretty Dominica and the destruction was complete.

We wanted to stop at our favorite island to at least tell our local friends we were thinking of them and would return later in this sailing season, once the area is ready for visitors.  It was a great sight, seeing Lawrence of Arabia in his little boat as he came motoring up to us to say Hi.

Lawrence talked about the hurricane and the area’s clean up and how everyone was coping with no electricity since September.  Most houses suffered severe damage and are slowly getting put back together.  In the words of Lawrence, “we will be back as we were, just slowly though.”

We weren’t able to visit the Kalinago Reservation (Carib Indian Reservation) on the other side of the island to see how Sexy Bones was doing.  As resourceful as he is, we are certain he is still tending his vegetable and herb garden while enjoying life!

With only a short visit to Dominica we headed south again and made landfall in St. Pierre, Martinique where there was no hurricane damage this season.  But more on Martinique will be the next chapter in this journey on Aspen.

Also, our book, Voyage Into Hell, is available at Amazon.com
Posted by Aspen at 10:00 PM No comments:

Where we left off in April… 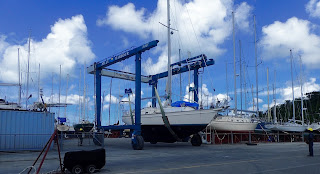 Aspen at Jolly Harbour Boatyard, Antigua - ready to go into the water! 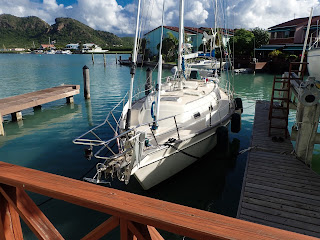 Aspen behind our rented condo at Jolly Harbour , Antigua - no sails or anything else has been put on her yet.  So much work ahead of us... 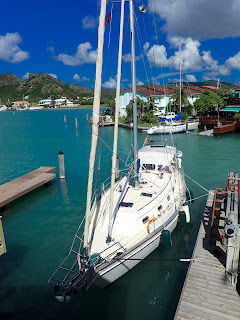 Two days later and Aspen still behind the condo at Jolly Harbour, Antigua.  Now everything is fitted again and she is ready for sea and another sailing season in the warm Caribbean Sea.  What a view we have as well!

Well, how about that?  It is already the next sailing season for Aspen!  How fast time flies, or so it seems.

Aspen survived a category 5 hurricane at Jolly Harbour boatyard in Antigua.  WOW.  Hurricanes don’t get any stronger than category 5.  The eye of hurricane Irma with 220 mph gusts pummeled Antigua’s sister island of Barbuda, completely and absolutely destroying everything on the island.  Antigua is a mere 25 miles away from Barbuda with the massive eye wall of hurricane Irma measured at a diameter of 40 miles.  Antigua took a solid hit from hurricane Irma as well.

News reports from Barbuda told of total destruction while the reports from Antigua seemed surprisingly positive.  “Not much damage in Antigua”, the local broadcasters said solemnly on the TV station being broadcast live via our internet connection as Irma churned murderously right next to Aspen sitting patiently in Jolly Harbour, Antigua.

As our airport taxi dropped Maria and I off at the boatyard, we looked in wonder at pretty Aspen sitting just as we left her in April.  What a glorious sight!!!

We scampered onboard Aspen and noticed lots of dirt and pieces of gravel littering her decks, blown in from the surrounding hills.  Those fantastic hills provided the protection Aspen needed in order to survive the monster hurricane Irma.

The boatyard manager was surprised when I reminded him we were putting Aspen into the water in two days.  “What?” the manager said.  “Don’t you want to paint the bottom and work on your boat?”

I reminded the manager we did all of our boat work prior to leaving in April, allowing us to get Aspen floating as soon as possible and out of the dreaded dirty boatyard.

Aspen was launched last Thursday, on island time of course.  Once in the water, Maria and I motored 1 minute, around the corner to a dock located right behind a condo we rented for the week.

So here we are, watching Aspen float quietly 10 feet away from Maria and I, sitting in our air conditioned condo with hot showers, refrigeration, reliable internet and TV.  We never had the opportunity to have this kind of arrangement before but thanks to our friends, Don and Donna who miraculously still have a Villa on St. Maarten, all of this was possible for us.  But this great arrangement won’t probably ever happen again so we have to enjoy it while we can.

Did I mention that the admiral is really happy???

So what are our sailing plans for this season, you might ask?

Talking with our sailboat insurance company, storing Aspen in a boatyard anywhere in the “Hurricane Box” - meaning anywhere north of Grenada, will result in at least a doubling of our insurance premium, IF they will insure us at all.

All of this means that we will sail south from Antigua this year and slowly make our way to Grenada where we will store Aspen for the 2018 hurricane season.

Sure we have been south before where there are lots of choices for islands to visit again.  Places lying in the sunshine like Guadeloupe, Dominica (to see the destruction, geeze), Martinique, St. Lucia, Bequia and the Grenadines with the end of the season eventually in Grenada.

Most of our cruising friends will be heading to these same islands so we will rendezvous with them in the Windward Islands this sailing season.

You can bet the rum will still flow as we watch the setting sun during happy hour; the beaches will be blindingly white in the scorching rays of the tropical sun; and the warm Caribbean Sea still invites us to snorkel and swim with her every day.  We are very fortunate to spend winters in this tropical paradise!

So stay tuned and we will share our adventures, both idillic and not so good, during our continuing sails on the good ship Aspen in these little latitudes this season.

PS -  Also, our book, Voyage Into Hell, is available at Amazon.com
Posted by Aspen at 2:51 PM No comments: