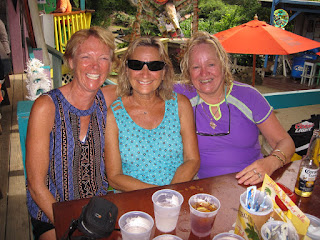 Michele (Tarantela), Maria and Heather (Lady Britt) after the long walk to Coral Bay for drinks (and food too)! 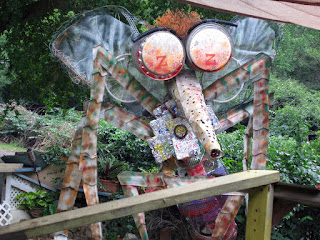 In case you wondered what the Zika mosquito looks like 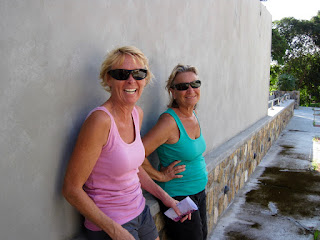 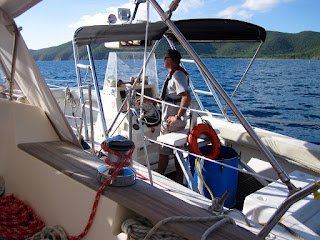 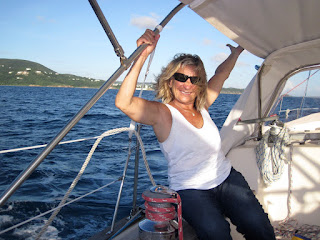 Maria happy to be underway once again, even if it is with a little help 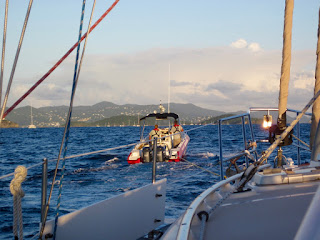 Towing Aspen into the wind.  Luckily we had fairly gentle conditions! 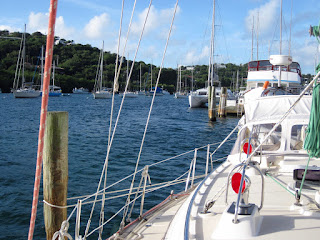 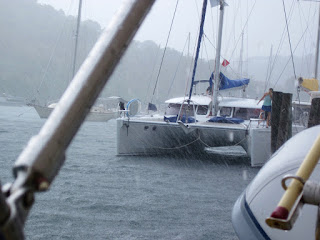 Better to be in a slip in these conditions, since we don't have a working engine!

Aspen anchored in the US Virgin Islands, home to cheap rum, plentiful supermarkets and groceries direct from the good old USA.  Wow.  And the mail service for parts is quick and cheap too.  Gotta have access to boat parts and little did we know how crucial that really is.

It took us nearly a month to get Aspen refitted (everything brought back to working order) before we could leave Puerto Rico.  It was a great stay in a wonderful country with explorations of Arecibo and ancient Taino religious sites in our trusty rental car.  Luckily we only saw one slow speed head on collision on the narrow roads in the middle of Puerto Rico.

Driving around San Juan is not for the weak at heart.  Pot holes will swallow your tires before you can say Santa vaca!

Finally the winds abated, somewhat, and we were off to Culebrita, a small island off Culebra.  Clean clear water made our short stay a great way to start the cruising season.

We sailed direct to St. John next, a sail of only 30 miles and we were back in paradise.  The anchorage was full of sailor friends so happy hour and hiking made us feel right at home once again.

We had one memorable hike from the north side of St. John to the south side (Coral Bay).  It was raining so what better activity than take a short hike with friends?  Well, the forest service signs kind of had the mileage wrong so it was a lot longer, steeper and muddier than we expected.  But everyone persevered and we ended up at Skinny Legs bar/restaurant on the water for burgers and beer, a bit soggy and sweaty from the hike.  It doesn’t get much better than that!

Then it was a nice sail to Lameshur Bay on the south coast of St. John before heading to Brewer’s Bay back on St. Thomas.

It was in Brewer’s Bay where all the excitement began.  Hmmm.

Maria and I were motoring out of Brewers Bay with the mainsail up and nicely filling as a piercingly loud alarm went off in the cockpit.  The engine was nearly exploding from overheating, it seemed.  Quickly turning the engine off and making a U-turn, we sailed her back into the bay and anchored under sail.

Captain Steve worked and worked on the engine but to no avail.  Overheating?  That was a new one with a lot of possibilities.  Replacing all the obvious causes had no effect on the problem.

Exasperated, Captain Steve went in search of a mechanic on St. Thomas.  Not an easy thing to come by, as you might expect.  Getting lucky, he found one who could look at the non-functioning engine in 7 days time.  Geeze.  Oh, first we have to get Aspen to the other end of St. Thomas in order for that to happen too.

After more futile work on the engine we decided to get a tow to the mechanic (18 nm away), into the wind.  TowBoat US showed up at 3:30 pm.  After a 3 hour tow into the wind and after sunset, Aspen was ingloriously pushed into a waiting dock at American Yacht Harbor where we are now waiting for the mechanic to diagnosis our problem.

Oh yes, Christmas is coming, along with Zach and family who will spend it with us on Aspen before the engine will be fixed.  We have the lights and tree up to welcome them to a tropical kind of celebration.  A little different than Colorado to say the least.

Also, our book, Voyage Into Hell, is available at Amazon.com
Posted by Aspen at 3:51 PM No comments: