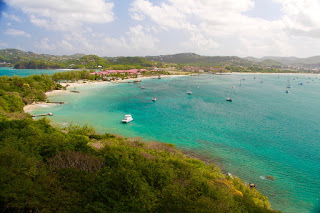 Rodney Bay, St. Lucia, where Aspen is enjoying some time this winter. 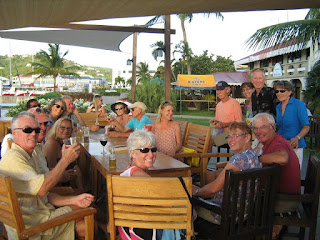 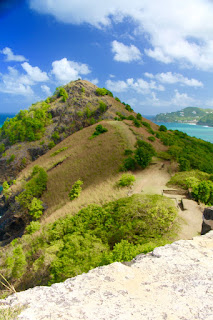 One of our hikes in St. Lucia went to the old fort and eventually to the top of the peak in the distance.  If you notice, it is a very hot and steep hike but the views are incredible. 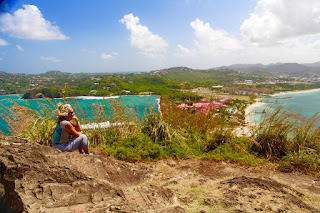 Maria enjoying the views from the top of the peak, high above the fort. 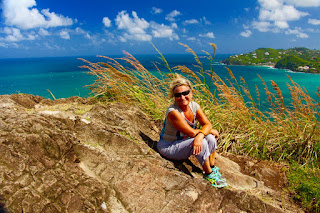 Maria basking in the warm sunshine after her climb above the fort. 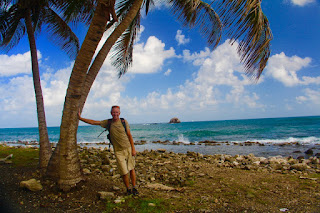 Steve holding a palm tree up along the shore of the Caribbean Sea. 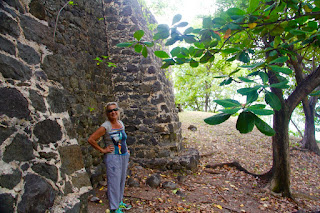 The old fort on Pigeon Island 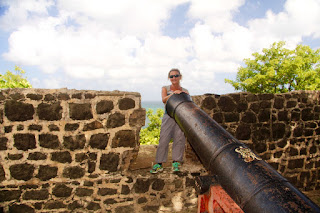 This cannon is a little bigger than the one at our house in Colorado! 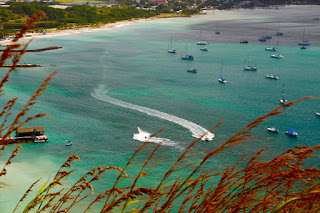 It looks like party time in Rodney Bay with the anchored boats and airborne jet!

The sailors in the Rodney Bay, St. Lucia received a call for assistance on their VHF radios one afternoon while many of us seemed to be enjoying a lazy day on our boats, Aspen included.

It seems a Hobie Cat from Sandals Resort was headed out to sea without anyone on it.  Well, there had been two people on the Hobie Cat but now they were floating in the water some distance away, wearing their life jackets, as the unmanned Cat enjoyed a fast sail westward.

Several sailors went to retrieve the wayward Hobie Cat as another sailor rescued the two people floating in the sea, unharmed but not happy.

It turned out no one at Sandals Resort seemed to be paying attention to the departing Hobie Cat nor the floating people.

Luckily a sailor in the anchorage was watching the activities and called for help.

These are the antics we sailors love to watch, as long as they turn out alright.  You gotta love it.

Aspen is off to another island this week, Martinique, as the winds and waves rule our lives.

Also, our book, Voyage Into Hell, is available at Amazon.com
Posted by Aspen at 3:33 PM No comments: 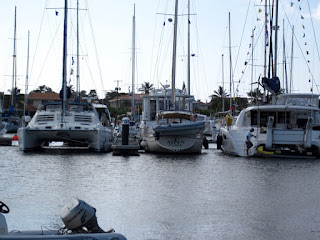 Aspen at Rodney Bay Marina, St. Lucia.  We are back on the grid! 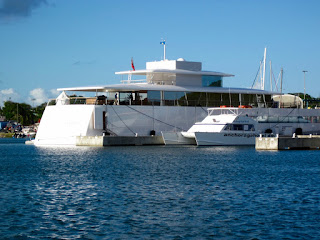 The mega-yacht Venus.  Designed by Steve Jobs of Apple fame.

The front view of Venus, a floating city. 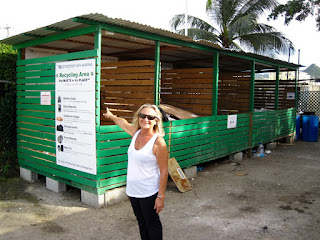 The recycling area at Rodney Bay Marina.  Isn't it nice?  When the truck appears to haul the trash and recyclables away everything goes together into the same truck of course.  So much for that concept! 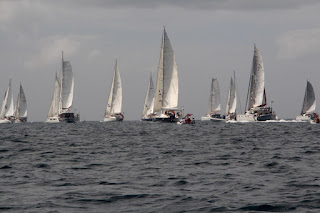 The start of the World ARC around the world voyage.  Several of our friends will be back in a couple of years when they finish! 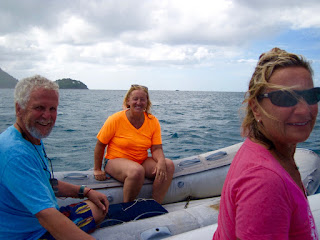 Jeremy and his wife Janis from the sailboat Raylah who we last saw in French Polynesia in 2010 appeared in St. Lucia.  It was great to catch up with them. 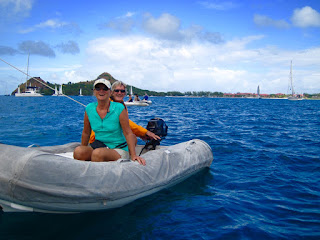 Our friends Charlie and Anina from the sailboat Prism who were with us watching the start of the World ARC out in Rodney Bay. 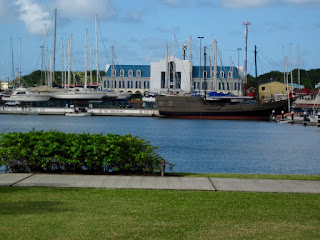 The new party boat, the Pearl, at the dock in St. Lucia.  The previous party boat, Brig Unicorn, sank on the way to St. Vincent 2 years ago and was replaced.  Watch out when you are out sailing here! 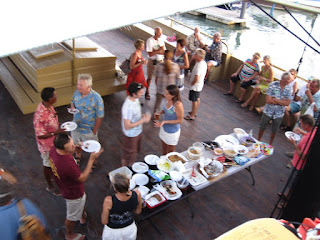 Some of the party crowd on the Pearl in Rodney Bay, St. Lucia. 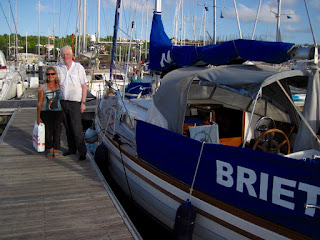 This is Duco on the sailboat Briet.  He sailed on his boat with us from Panama to Australia to complete his circumnavigation.  Now he is back in the Caribbean before continuing onward.

Aspen sailed well enough to pass 2 catamarans too!  If we get the wind on our beam Aspen can rock and roll just fine, thank you.

Rodney Bay is a center for sailors from all over the world and the place where Aspen and her crew finished their circumnavigation in December 2013 if you remember.  It is a great place to visit.

We are surrounded by sailors from The Caribbean, France, Germany, Poland, Israel, Holland, Denmark, Finland, Sweden, Australia, England, Canada and of course the USA.  It is a potpourri of nationalities to say the least.  Figuring out what anyone might be saying is quite a challenge too with the different accents.  But we all get by and the beer and rum flows nightly on the Boardwalk in the marina.

I forgot to mention that our favorite mega-yacht, Venus, is also here.  The ship is massive and lights up the entire harbor during the night with their deck lights.  If only Steve Jobs could see her now.

There was a gathering of sailors one evening onboard the Pearl, a replica pirate ship from the Pirates of the Caribbean movie fame.  At least 50 people enjoyed telling sea stories and the rum and beer flowed freely.  Such is the life of wayward sailors in these little latitudes during our sailing season.