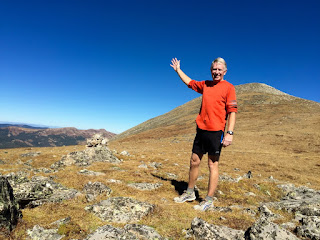 The Rocky Mountains of Colorado.  Yes the sky is that blue at 12,500 feet! 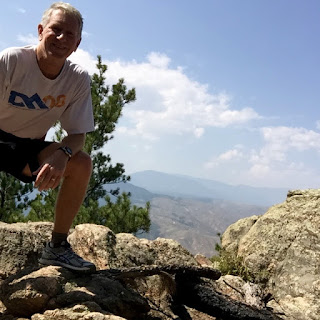 Trying not to fall off the rocky trail. 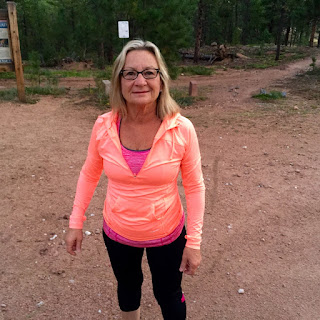 Maria waiting for me at a remote trailhead.  She found me this time!


Yesterday (Monday), a blizzard of golden aspen leaves swirled around me as I tried to keep from flying off the rocky trail, high in the Rocky Mountains of Colorado.  It was the last gasp before winter’s white glow envelops the high country and what a sight it was.  100 yards further I could see blue sky again and I hadn’t fallen off the steep trail, luckily.

I was running Segment #8 of the Colorado Trail when the winds stripped aspen leaves from their branches and hurled them at me.  Segment #8?  What does that mean?

I thought it would be a fun idea to run the Colorado Trail, across the width of Colorado, east to west.

The Colorado Trail is 486 miles of trails that begin near Denver and end in the western part of the state, in Durango.  Yes it is all on trails and the elevation is pretty high, 10,000 - 13,000 feet is common during any segment.  Segment #8 only went up to 12,500 feet but it was 26 miles long, counting getting lost trying to find the beginning of the trail at Copper Mountain ski area.  Geez, there are lots of trails among the ski lifts and access roads before finally finding the correct one.

Starting near Denver at the end of September I began with Segment #1, of course, before the
powers-that-be closed that Segment because of bear problems.  There are not problems with bears attacking humans but the Denver people decided that humans posed a problem to the bears because of trying to take ‘selfies’ with a bear in the picture.  You can’t fix stupid, is what I have heard.

So it is good to be a long way from Denver now, 120 miles to be exact, according to my GPS.  But the high country running season is at a close so I will need to come back next year and finish the run.

Maria is happy the high altitude runs are finished too.  She needs to find each ending point on a trail section and meet me, before I get eaten by something or hit by lightening storms.  That is a challenge sometimes.  Without a nice GPS display as we have on the boat, sometimes Maria’s navigation skills go a bit awry and I am left waiting for her to appear.  Who would have thought the highway would be closed for 3 hours, Maria explained to me?  Hmmm, it sounds like trying to have someone work on Aspen in a 3rd world country :)

And you thought we were taking it easy this summer?

(The book, Voyage Into Hell by Steve Siguaw can be found at Amazon.com too.)
Posted by Aspen at 11:38 PM No comments: