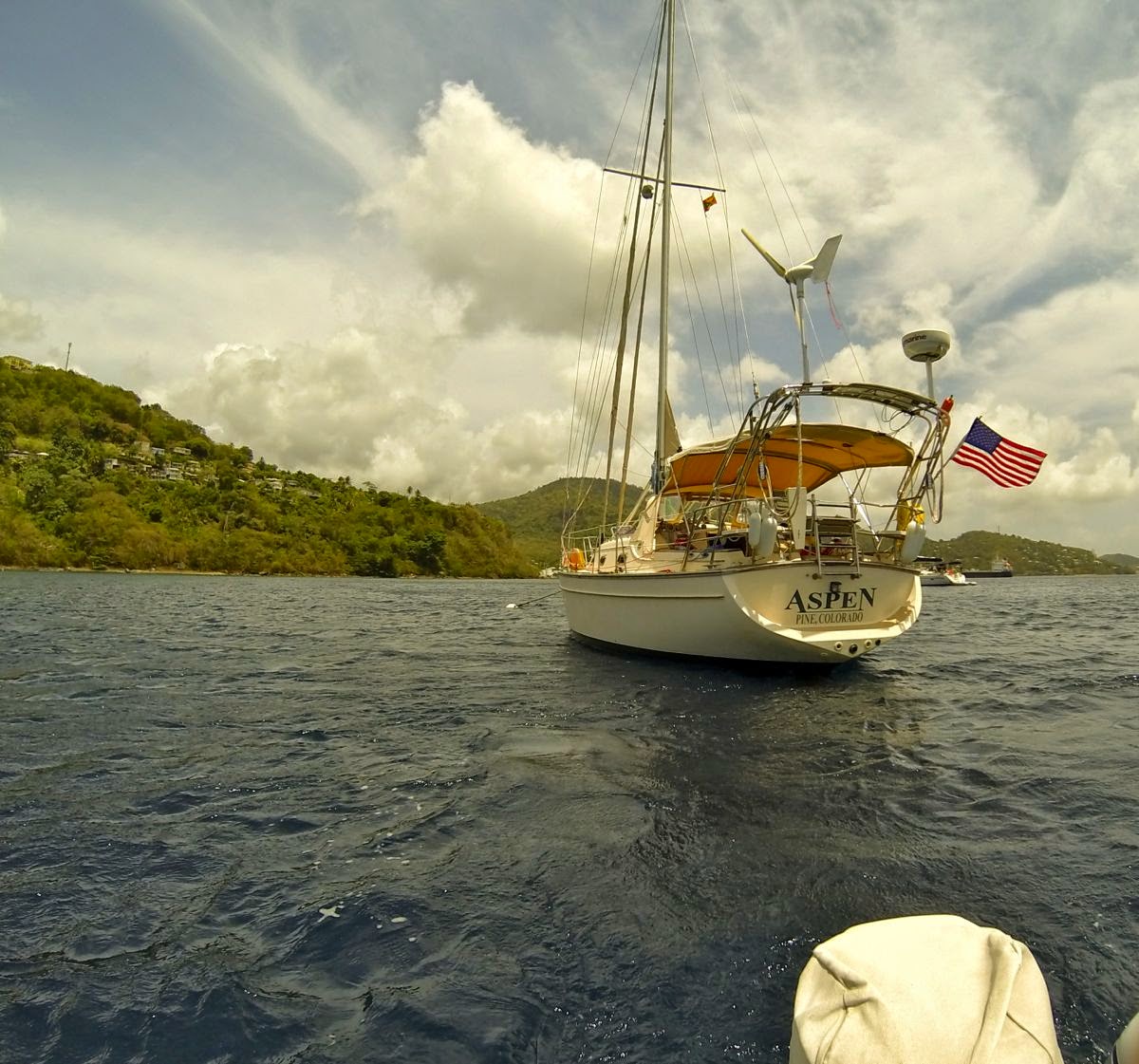 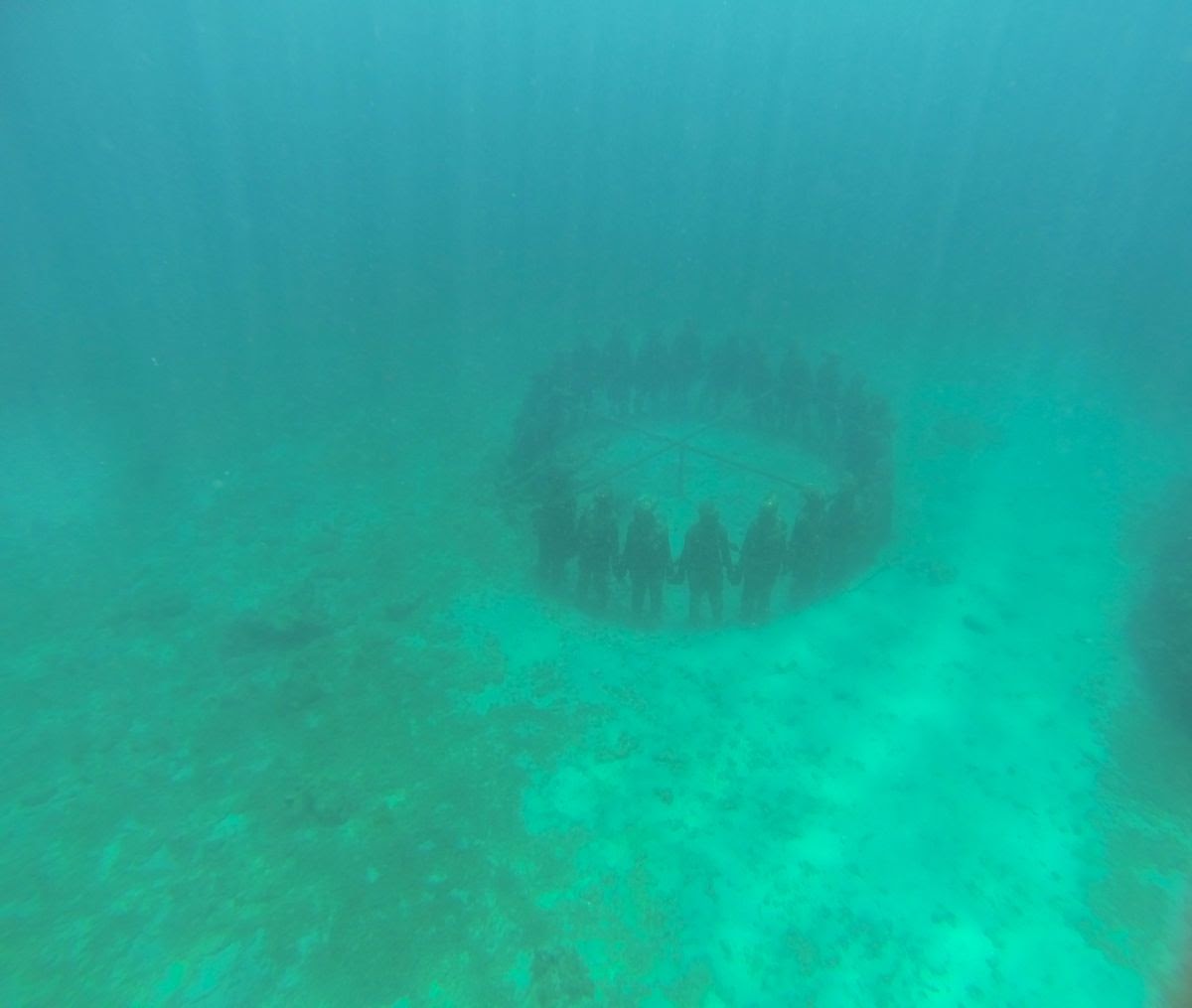 The underwater park in Grenada and the statues. Closeup of the underwater park in Grenada - just snorkeling around. 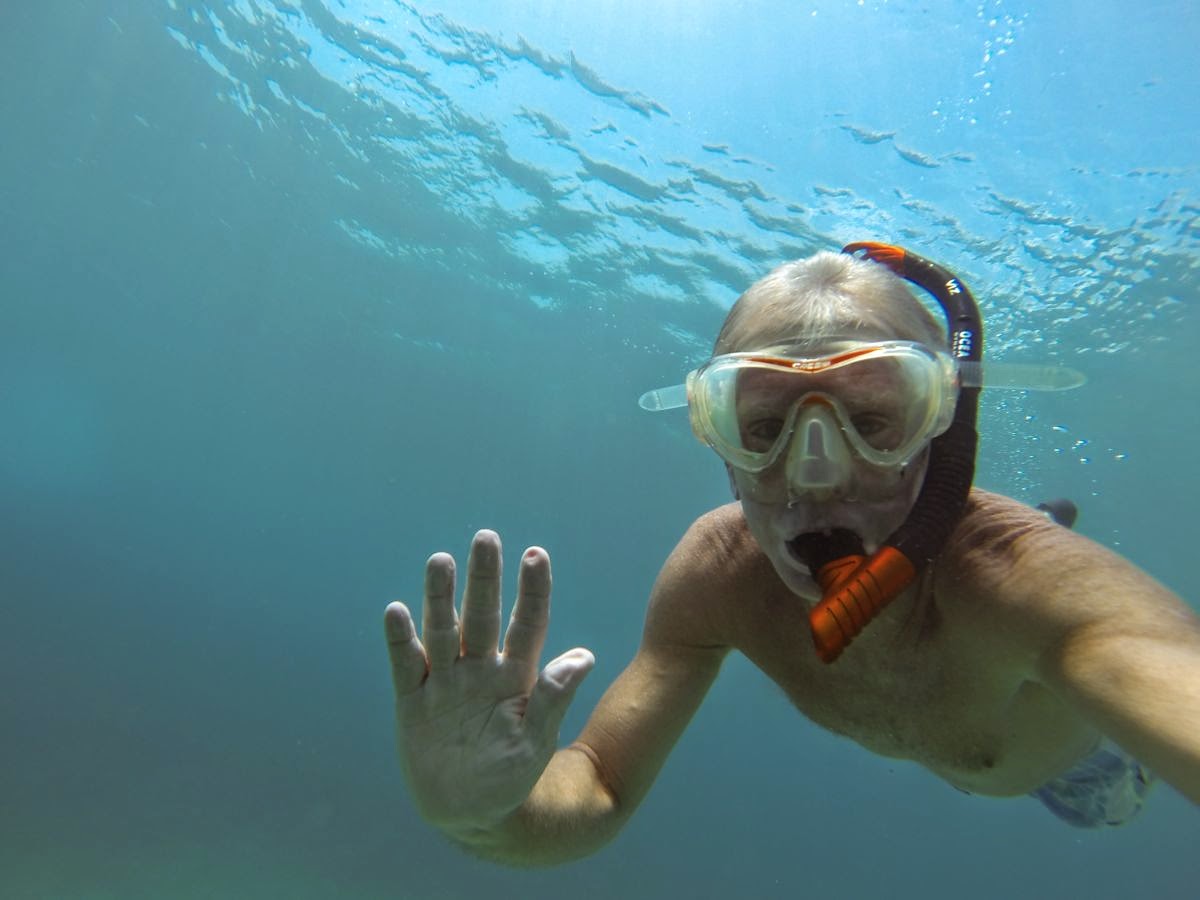 Not one of the statues - Captain Steve. 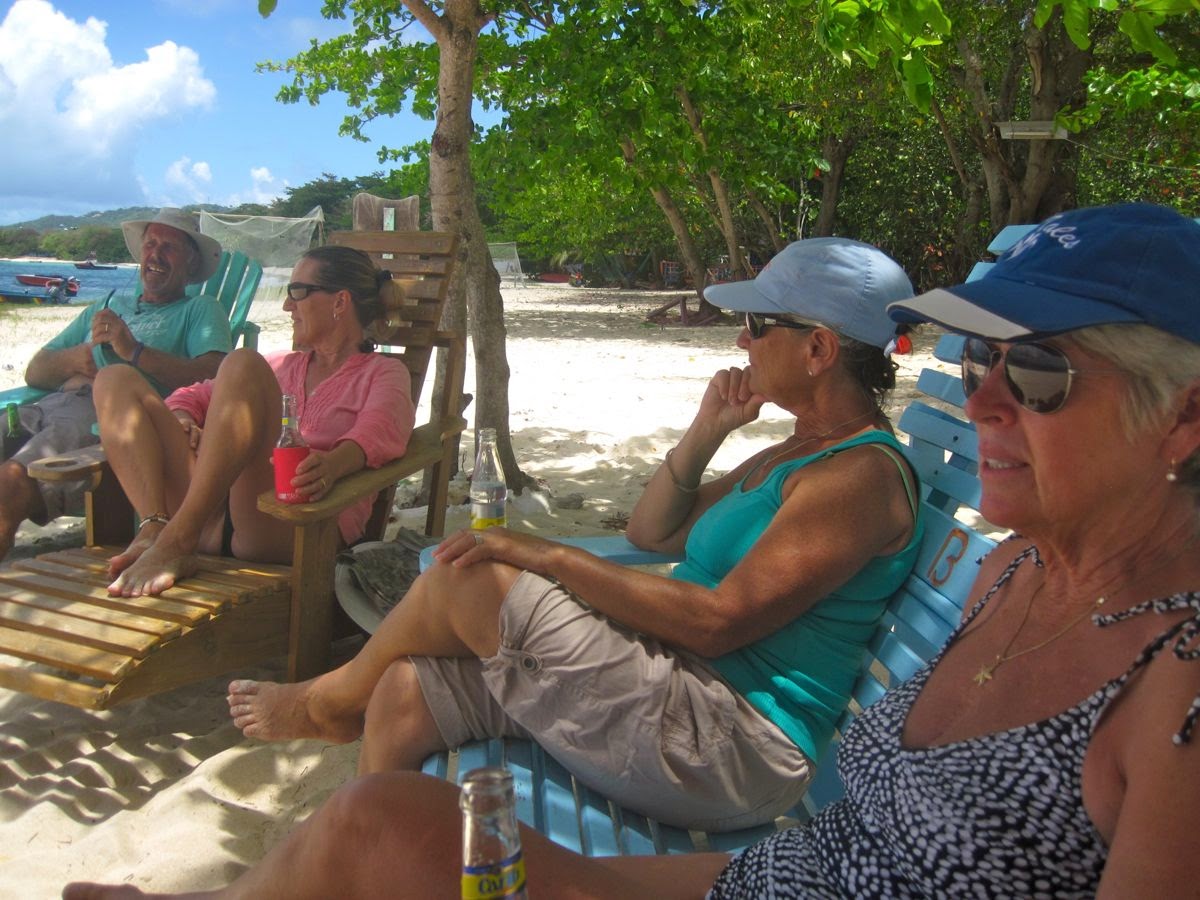 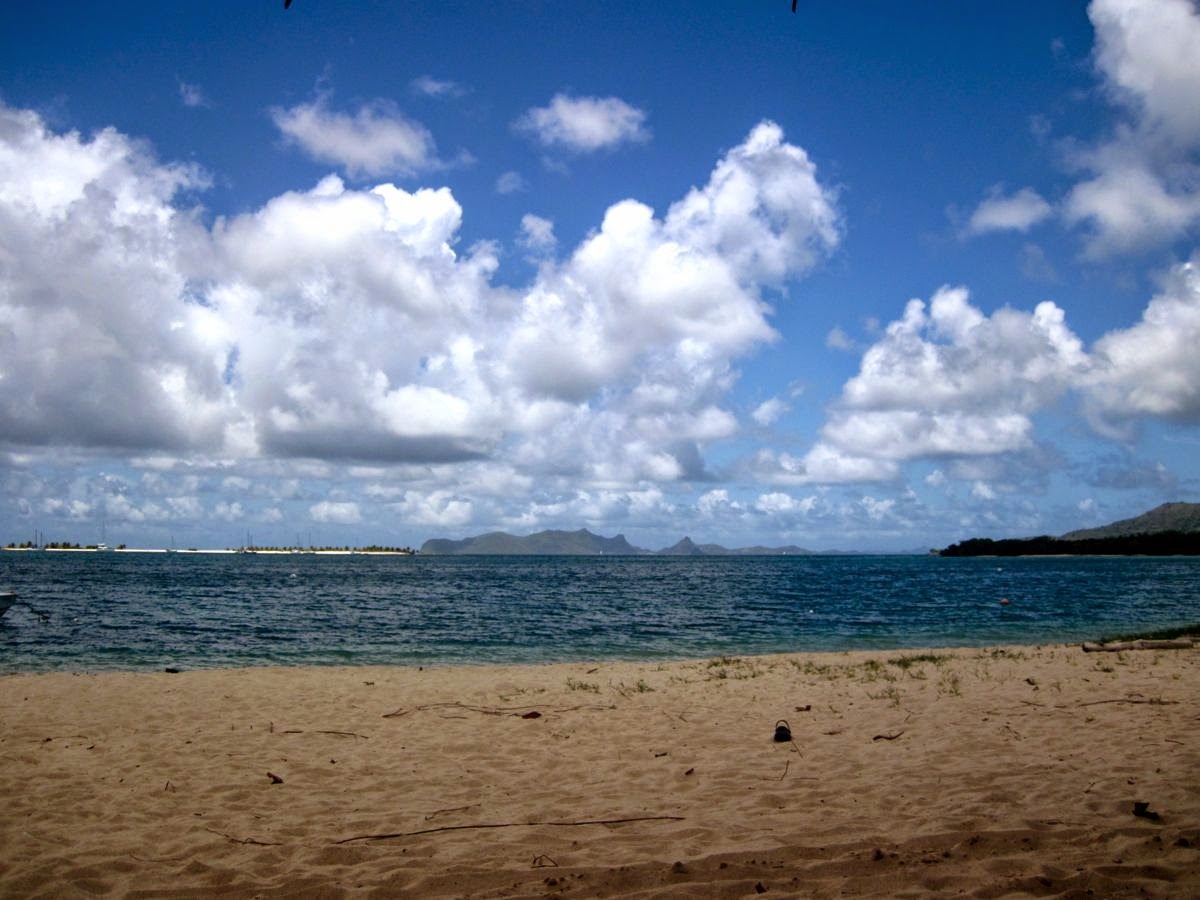 The view from Paradise Beach, Carriacou.  In the distance is Union Island and the Grenadines. 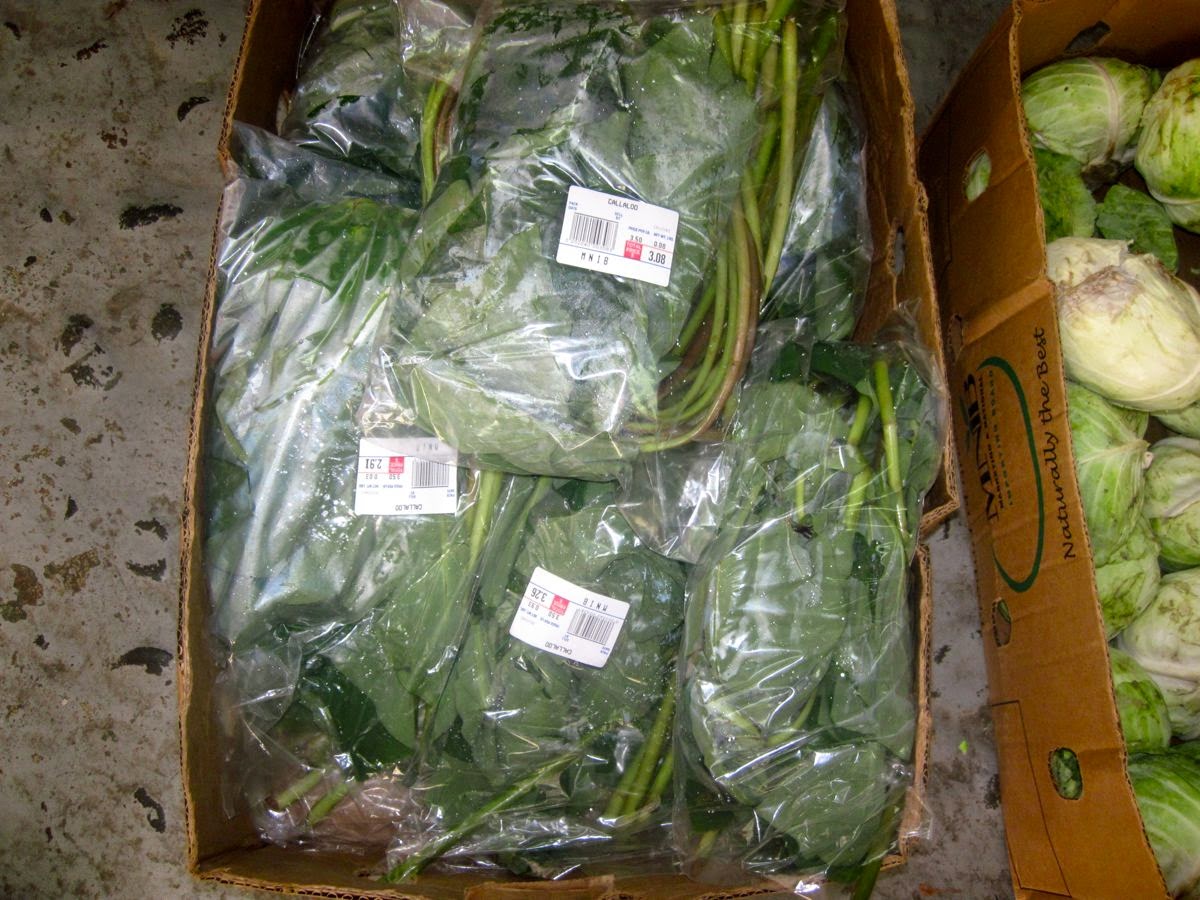 Callaloo at the veggie market - a vegetable Maria enjoys (but not Captain Steve). 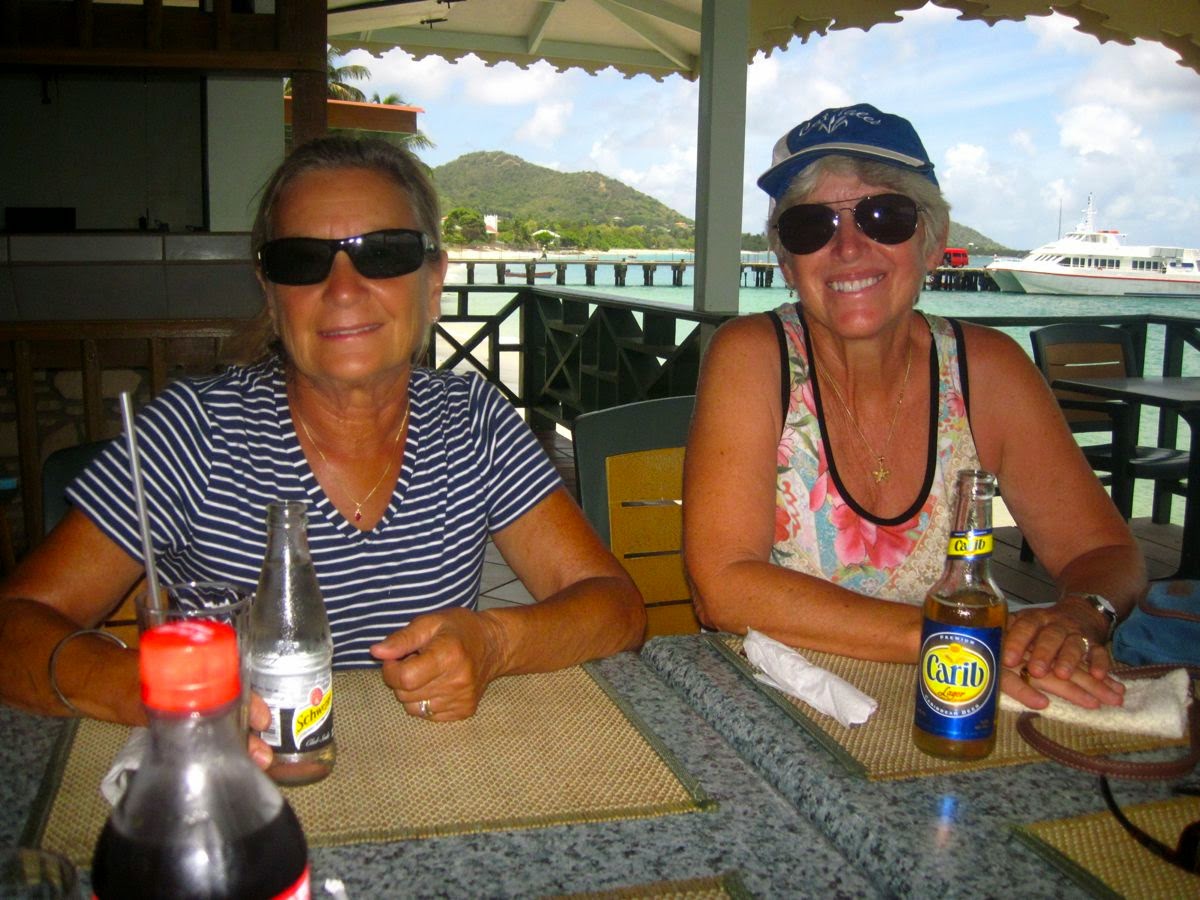 Lunch in Hillsborough, Carriacou with Dawn of Cat Tales. 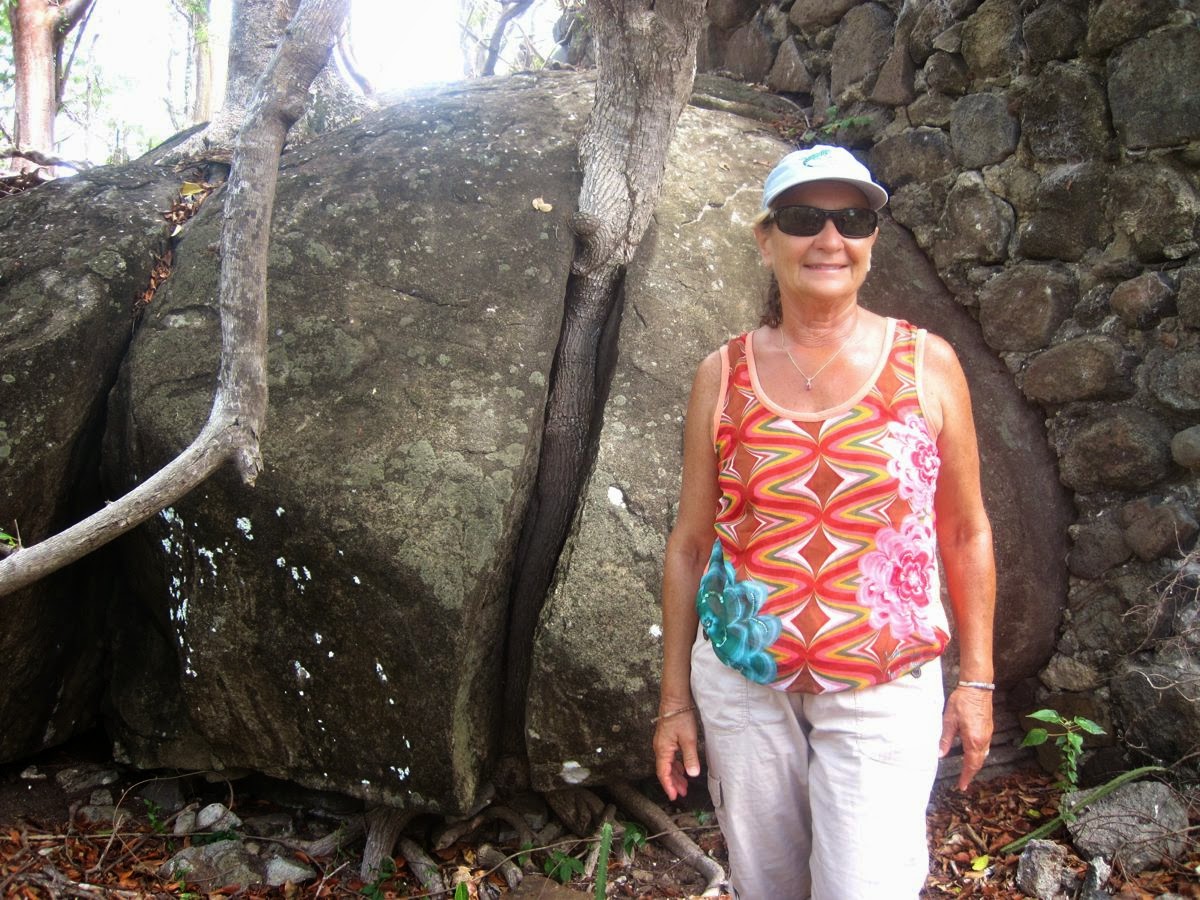 Which came first, the tree or the boulder??? 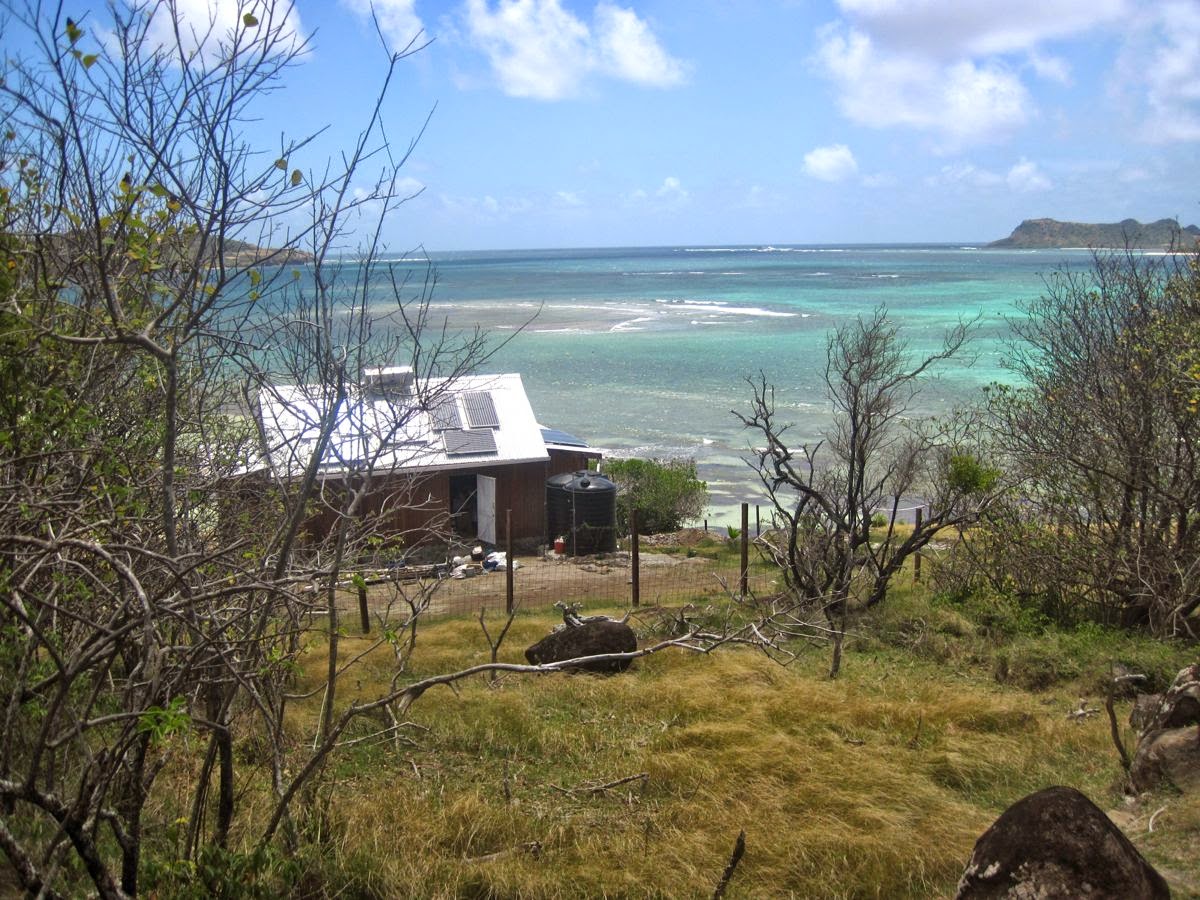 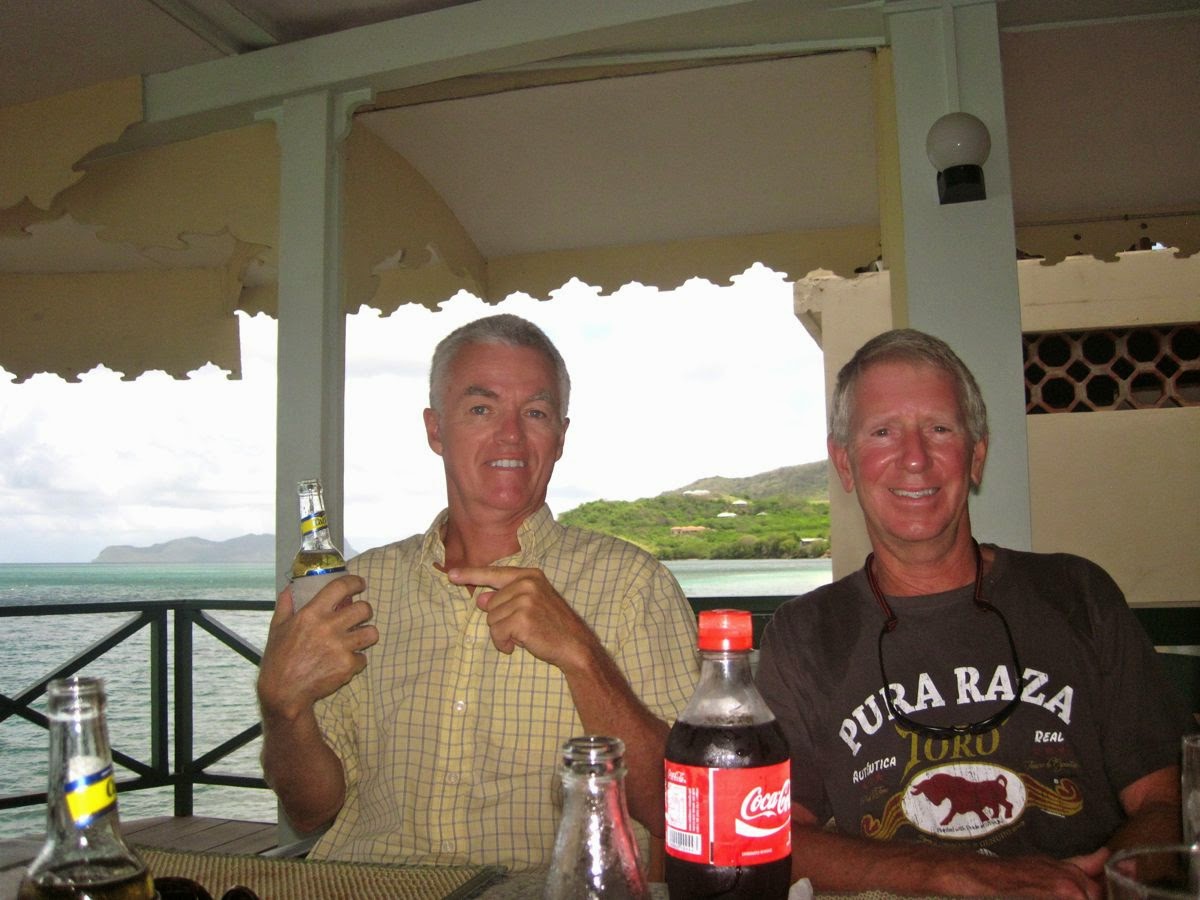 Laurie on the catamaran Cat Tales and Steve enjoying beverages in Carriacou.

We had two of our best sails this year coming down to Grenada.  There were beam winds and small seas that rocketed Aspen from Bequia all the way to Grenada.

Along the way we visited Carriacou, an island that is part of Grenada but obviously left in the past.  It is kind of a backwater place with little traffic and goats, sheep and cows owning a lot of the land.  Life is slow on Carriacou but the locals are nice and friendly toward sailors.

Then it was another fair wind passage to St. Georges, Grenada with a stop at the statues that comprise an underwater park for visitors to admire.  Time has taken a toll on the statures but they are still nice to visit and admire in such a setting.  Admiral Maria decided not to join Steve during the underwater exploration but made sure Aspen stayed safe nearby.

Presently we are at anchor on the east coast of Grenada at Prickly Bay, where cruisers congregate and prepare their boats for storage in the boatyard.  There are still happy hours, weekly hash house harrier runs and places nearby to explore.

Yet there is plenty of hard work to be done before Aspen gets another rest on land.

(The book, Voyage Into Hell by Steve Siguaw can be found at Amazon.com too)
Posted by Aspen at 3:21 PM No comments:

Bequia Regatta Has Come and Gone 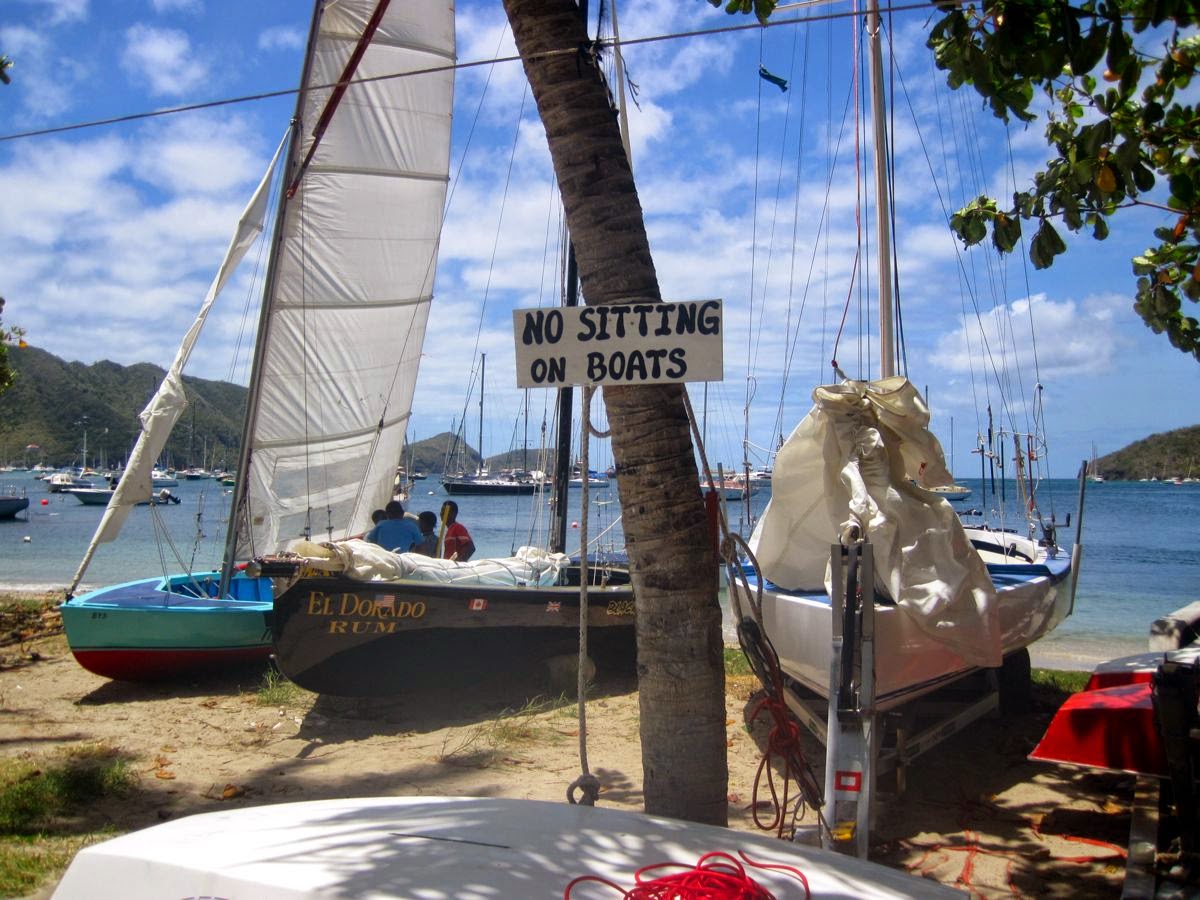 A few of the local race boats in Bequia.  Don't be sittin' on dem! 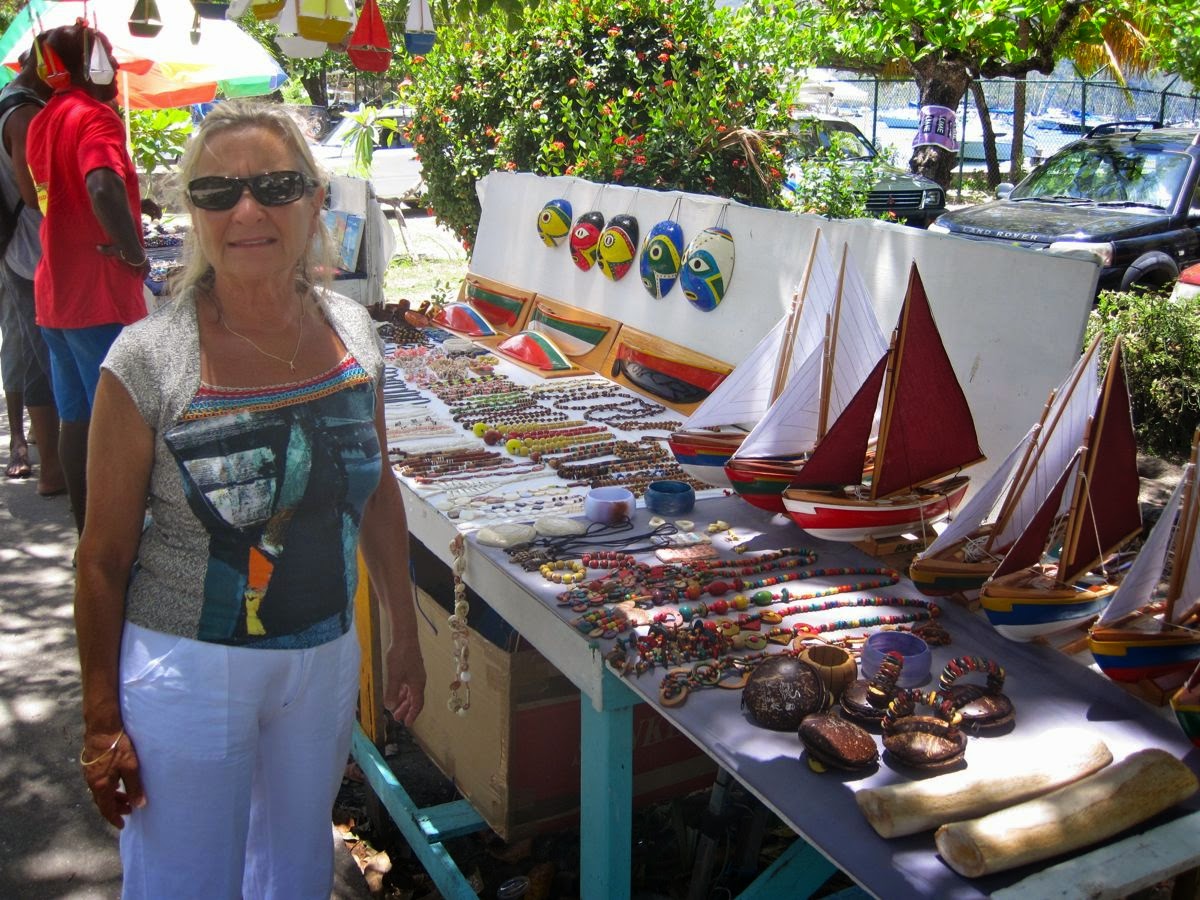 Maria shopping for local things at the local stands. 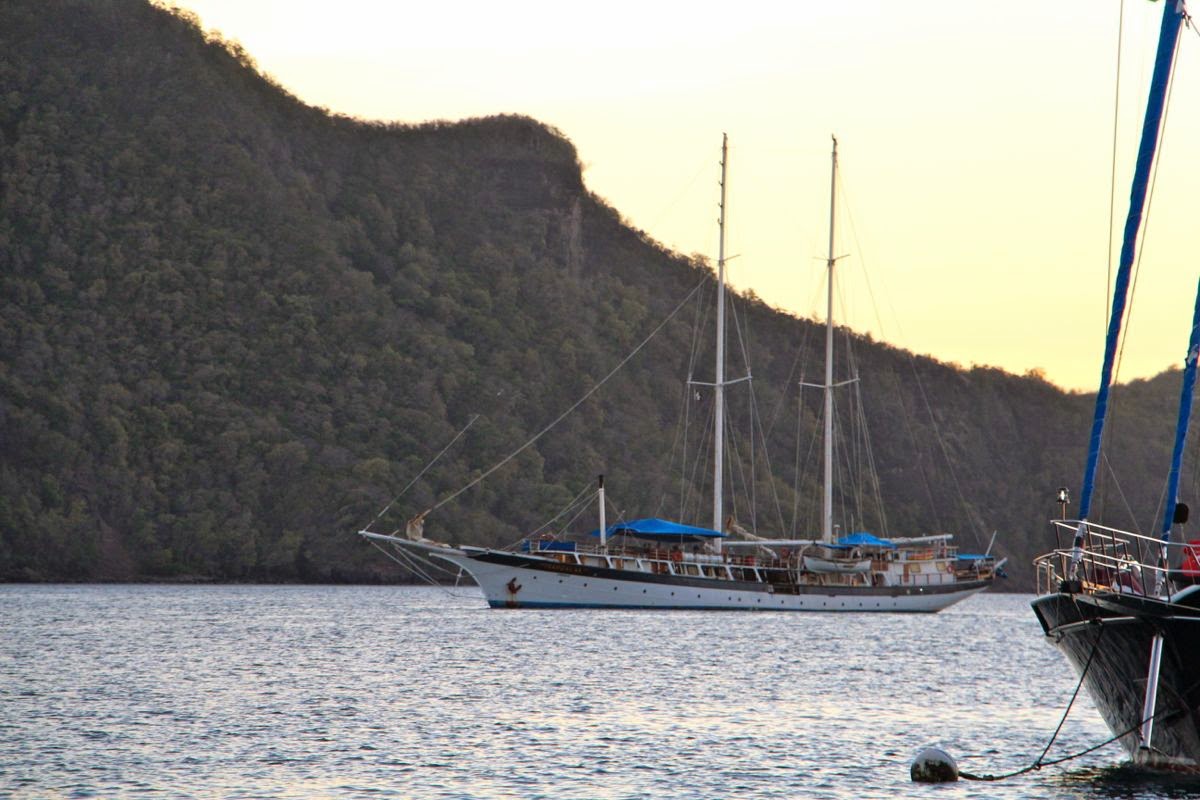 The Windjammer Mandaley with only 2 out of her 3 masts, for some odd reason. 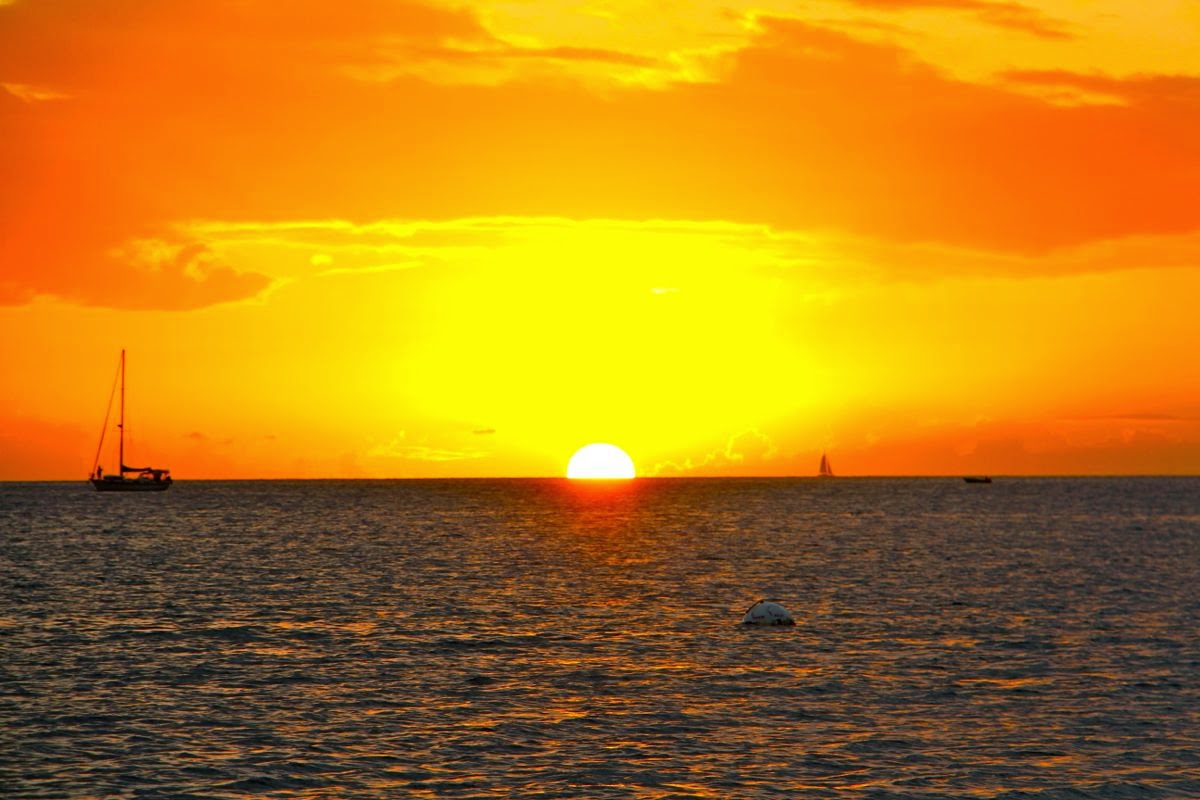 Waiting for the green flash at anchor in Bequia's Admiralty Bay. 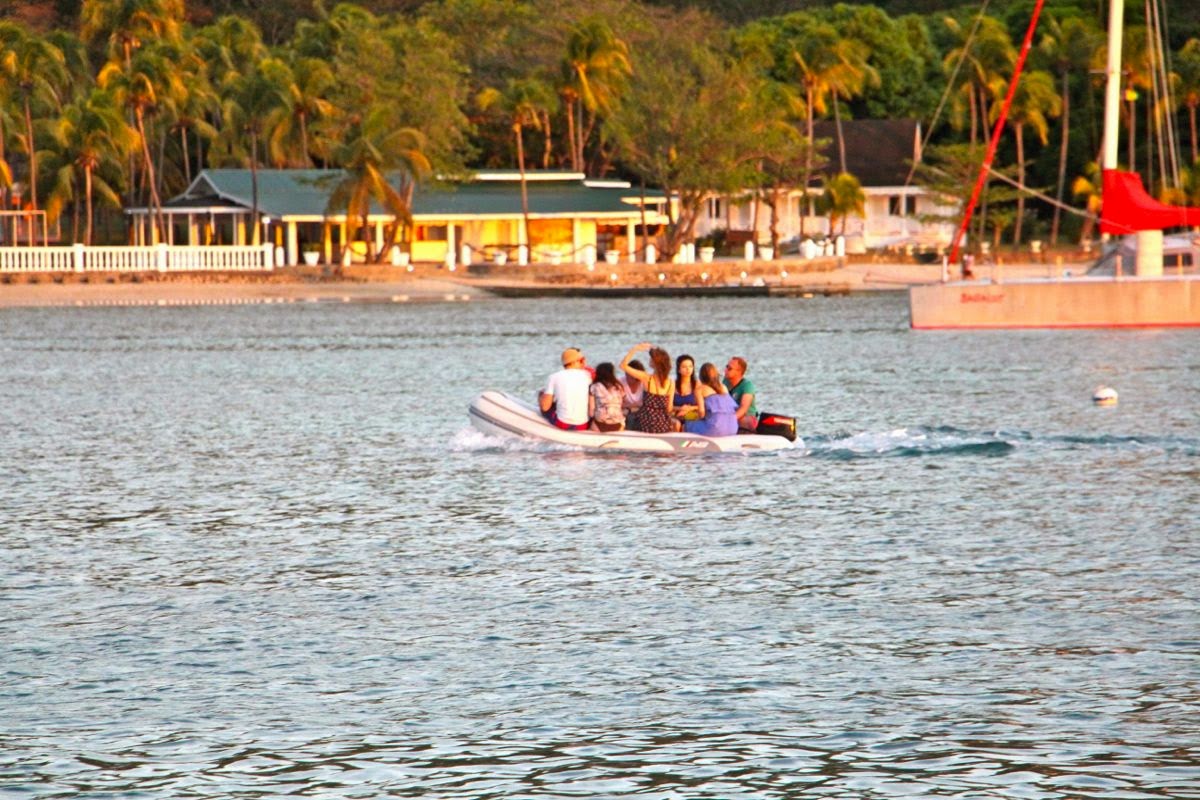 How many people can you fit in a dinghy and still float? 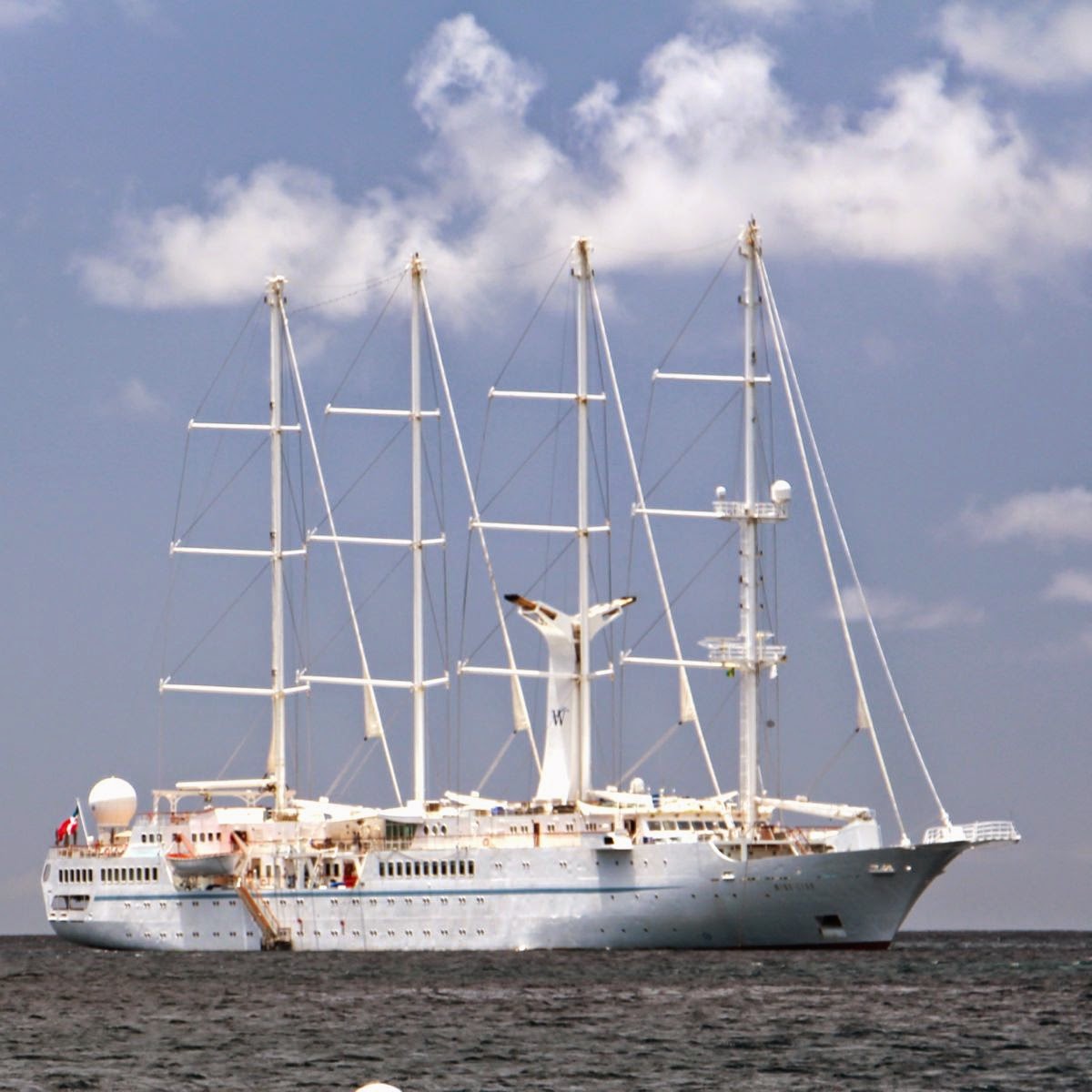 The Royal Clipper ship in Bequia. 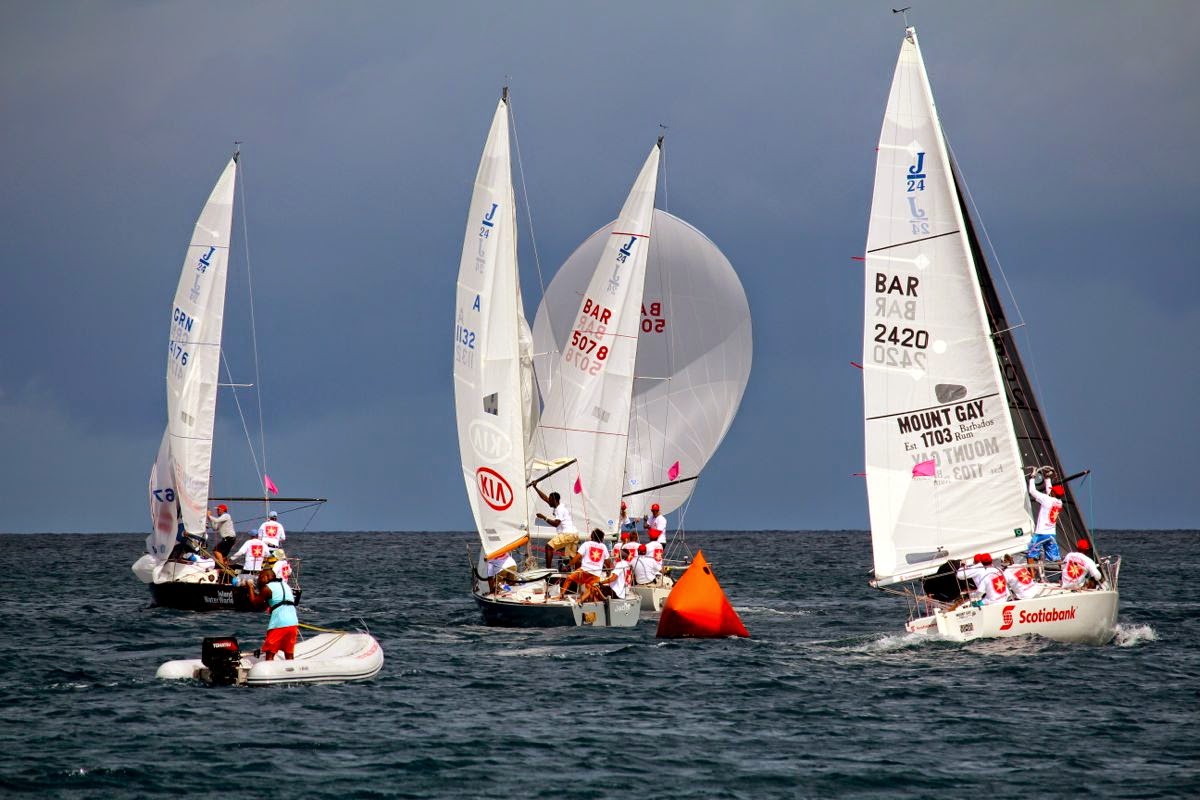 J-24 racing action in Bequia.  Note the photographer in the little dinghy trying to catch the action. 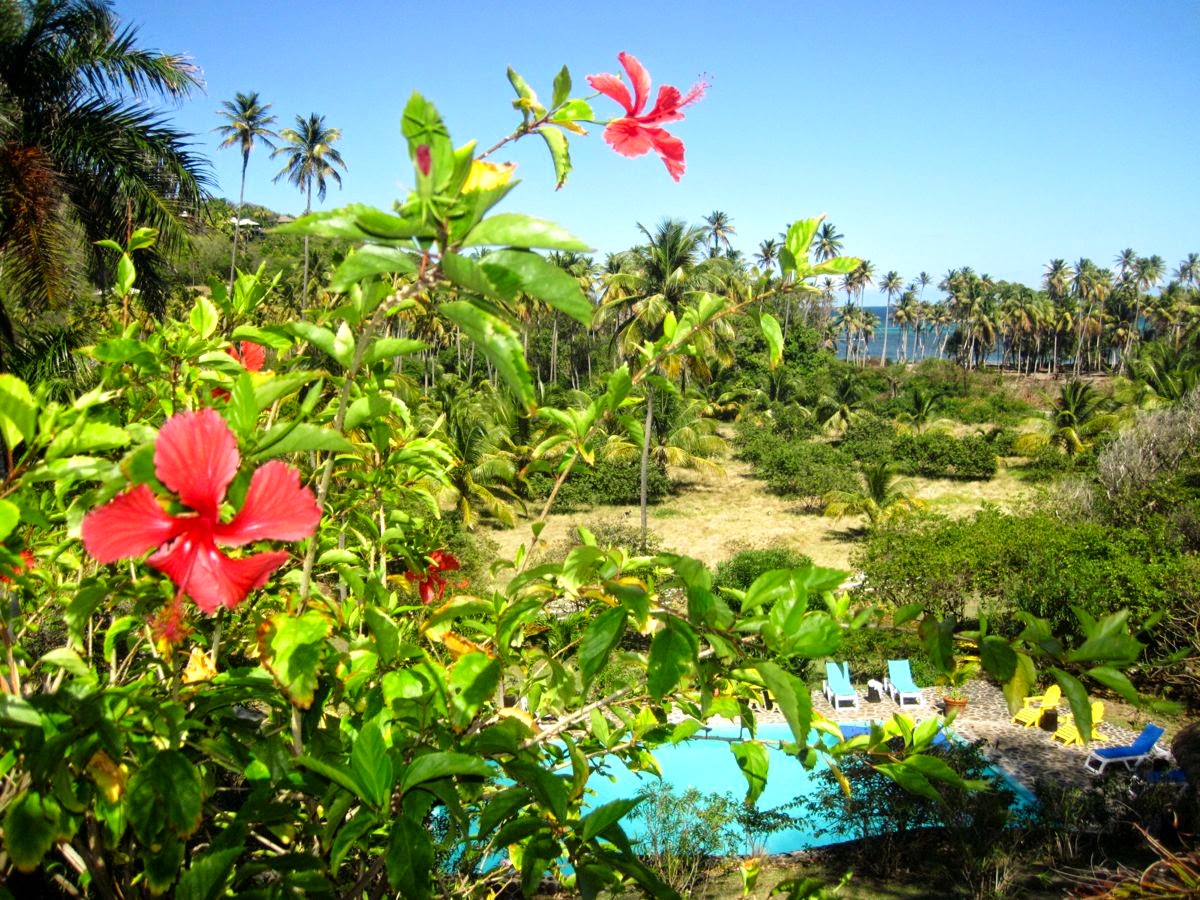 The view from the Fire Fly restaurant on Bequia.  Buy lunch and you can use the fresh water pool! 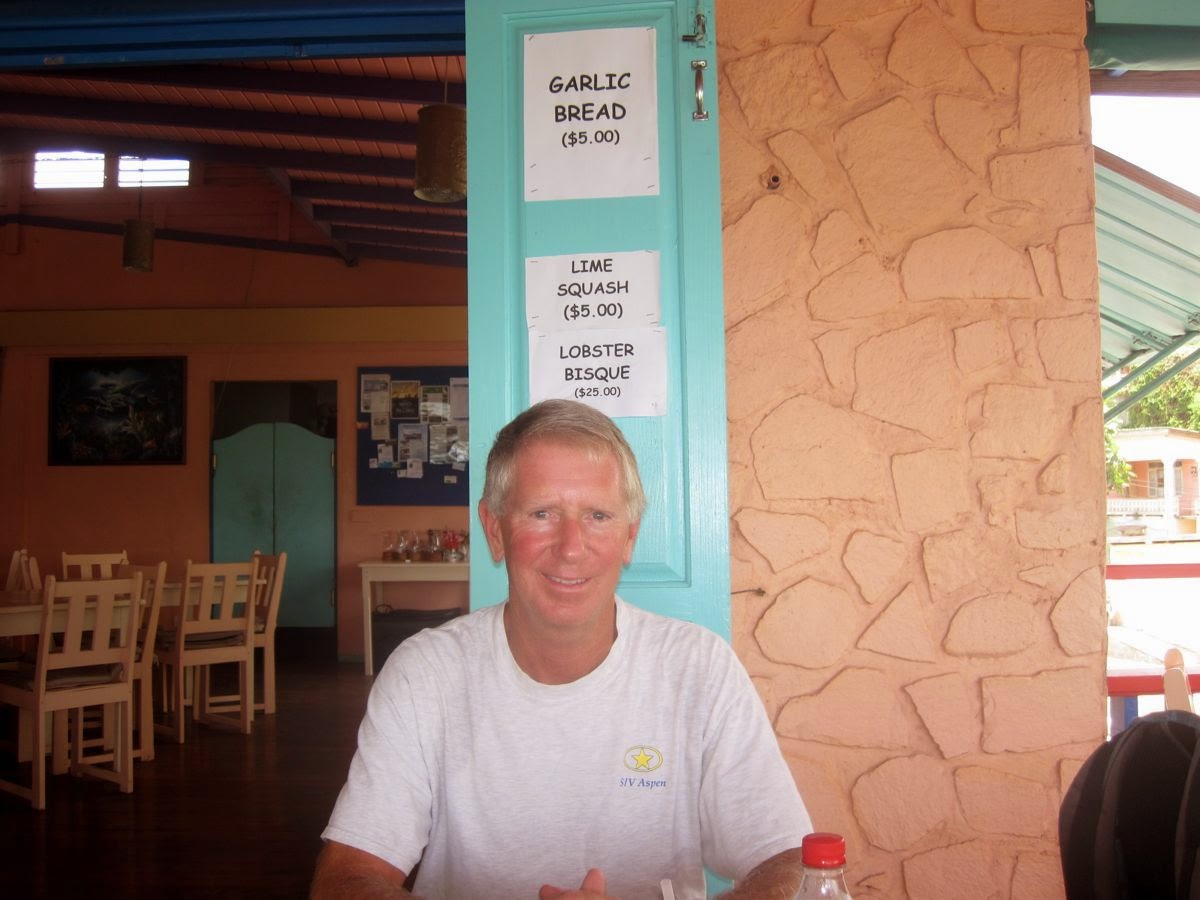 Captain Steve waiting for his lunch - you can see the menu behind him.

The Bequia Easter Sailing Regatta is now history.  We had to stay and see all the fun that the local sailing boats provide, along with the Caribbean sailors too.  Luckily Aspen was close to the marks so all we did was sit in our cockpit and watch the action.

Since it was Easter weekend in Bequia, most stores were closed and the ATM machine ran out of money, as expected.  Not to worry, Aspen was stocked up with essential provisions like chicken, pasta, and rum.

Now it is time to put the wind back in our sails and push deeper toward Grenada, our final stop this sailing season.  But there are so many islands to visit before we put Aspen on land again.  The legendary crystal clear waters of the Tobago Cays, Mayreau, Union Island and Carriacou are short sails away.  No overnight passages this year and Maria is thankful for that.

Sail on, sail on Aspen…
(The book, Voyage Into Hell by Steve Siguaw can be found at Amazon.com too.)
Posted by Aspen at 3:57 PM No comments: