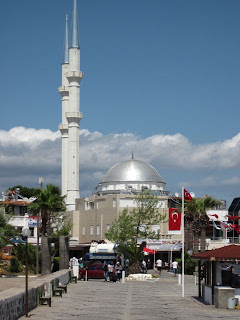 Back in Turkey as you can see by the flag and the mosque! 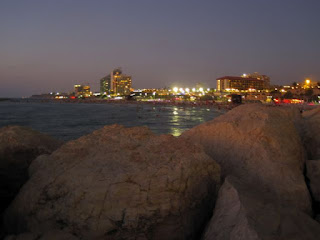 Herzliya, Israel beach near our marina.  If you look closely you can see a thousand people in the water at dusk.  Everyone likes to swim at night for some odd reason! 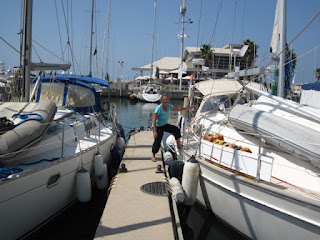 Our marina in Herzliya, Israel. Look at the yellow containers on Aspen's deck.  Those carry our spare fuel - lucky for us they were full when we ran out of fuel in the main tank!  At $10/gallon that is pretty expensive diesel but well worth any price!! 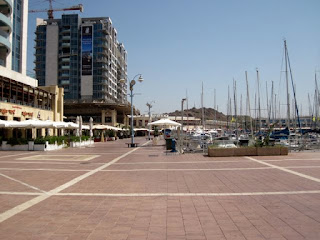 The mall next to Aspen's berth in the marina at Herzliya, Israel 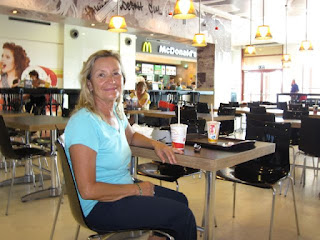 McDonalds in Israel!!!  They have the best burgers we have had in a looong time.  It must be the kosher meat!

Let’s see, during the short time we were in Israel there were:
7 Rocket attacks against Israel in the Gaza Strip
1 attempted self-Imolation in Tel-Aviv
1 fire bombing of a taxi in the West Bank

So we had a relatively quiet stay in a fascinating land ripped apart by war and strife!  Aspen was always prepared to go to sea on a moment’s notice – like if Israel decided to attack Iran, which they will do shortly or so they say.

The sail to Turkey was quite a bash into the wind and waves.  Maria stayed in her favorite place when not on watch, down below watching the DVD “The Devil Wears Prada” while Captain Steve tacked endlessly in order to keep on course.

Things went well with Aspen, even though we ran out of fuel 3 days into the voyage.  Ran out of fuel?  Well, we had the engine on to make some headway against the 9 foot swells and nasty chop.  Sometimes Aspen’s speed would be around 5 knots when suddenly she would be pushed backwards!  That was something new for us.

Captain Steve had calculated how much fuel we would use for the trip but didn’t take into account that more fuel was being used trying to make forward progress against the raging sea.  Suddenly at 10:00 in the morning (luckily it was daylight!) the engine just quit, died, suddenly stopped.  We had extra fuel in containers on the deck that we used to quickly pour into the tank.  This exercise was made more exciting by the bouncing and rolling of Aspen in the nasty conditions.

It took us about 40 minutes to get the engine started again and then we were back on our way, hoping not to entirely run out of fuel again before making landfall in Turkey!

We finally arrived at the entrance to Marmaris, Turkey trying to sail against 30 knots of wind and very large confused seas at 2:00 AM, of course.  There is nothing as exciting as trying to find our way into a harbor and anchor in the black of night.

Maria has a few choice words to say about the sailing conditions in the Mediterranean and none of them are “G” rated!

Aspen will get another well-deserved break as we prepare her for her temporary home on land.