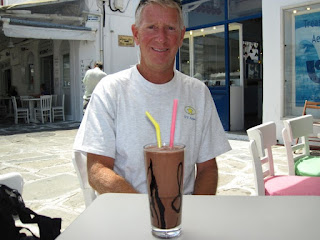 Captain Steve needs something to keep him cool! 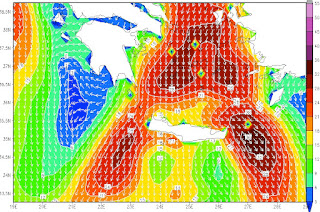 GALE heading our way, just as the Coptic Calendar predicted!!! 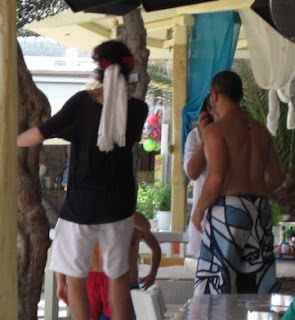 Keith Richards rocking out (or maybe just someone who looks like him!) 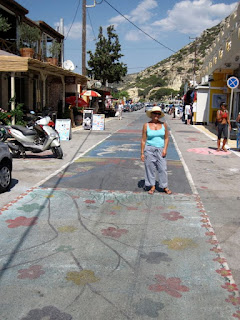 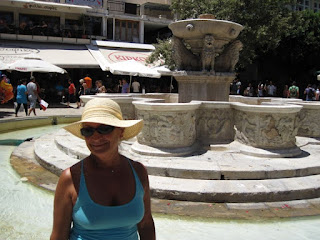 The Lion Fountain (from the Romans) in Heraklion, Crete 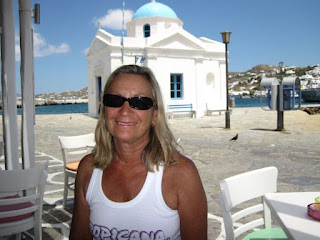 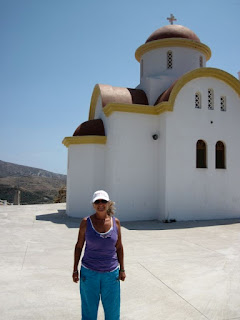 Lots of Greek churches are here for some reason! 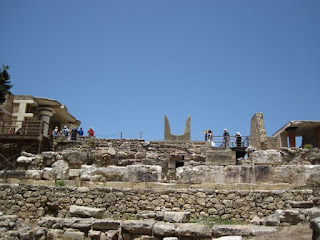 The ruins at Knossos with the famous horns in the center 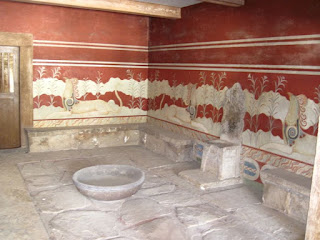 This is the throne room at Knossos.  The bench on the right against the wall is where the king sat. 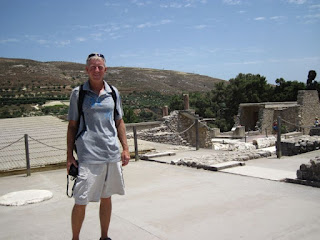 More of the Knossos ruins with the countryside in the background. 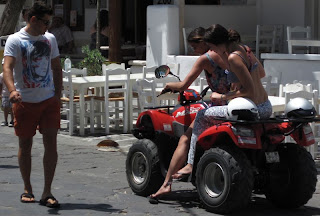 Riding an ATV with sandals is not always good.  They can fall off! 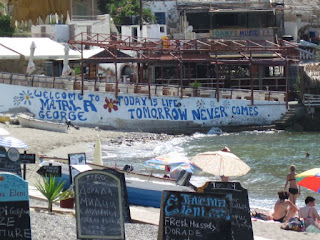 A nice saying at the Bohemian beach at Matala 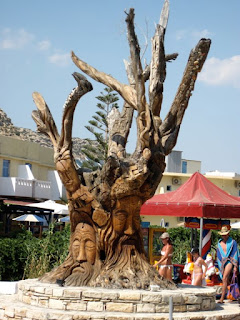 The carved remains of a tree in Matala near the beach. 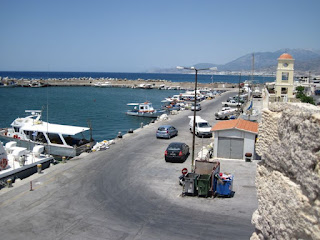 Port, fort and harbor in Crete

We live by the weather on Aspen.  Calms, gentle breezes and big storms guide our lives.  If only there was a Farmer’s Almanac to predict our weather here in the Mediterranean like it predicts the weather back home.

But wait.  We have what is called the Coptic Calendar, handed down thru the ages since 451 AD by a group known as the Copts who are descendants from the ancient Egyptians.  This weather calendar, written in stone, predicts gales, storms and other nasty weather for the Med.  Sure, these weather predictions were chiseled over 1500 years ago but maybe, just maybe they are accurate?

This coming Monday, the ancient calendar predicts, there will be a mid-summer gale all around us.  A gale with over 35 knots of wind will blow for 2 days, say the Copts.  The storm is called the Black Wind.

So I look at my high-tech weather charts: Monday, July 16th, nothing, nothing at all is forecast.  Ah ha!  So much for the ancients Captain Steve foolishly laughs.

Tuesday morning at 2 AM my intellectually advanced weather chart suddenly changes color to red and then a deep dark foreboding red color.  Gale!!!

A gale will hit us in this part of the Mediterranean just as the Coptic Calendar predicted, only 12 hours late.  That is pretty good for a calendar that was made in 451 AD!  And the weather forecasters in the US can’t even predict the weather for tomorrow.  When in doubt, look to the ancients!

We have been busy here in Crete, or so it seems.  Summer is here with 106 degree days and constant dry, cloudless skies.  We are baking!

There is everything from Keith Richards (with his back to the camera in the black t-shirt, or maybe his look-alike) and the hippie beach at Matala where Joni Mitchell hung out in the 70’s and wrote the song Carey.  The place and beach is still very laid back and has a nice hippie feel to it with the streets painted with colorful peace signs and things like that.

Another town called Malia is jam packed with young tourists who just don’t seem to sleep.  It is one enormous party town and the town has a McDonalds – that is the reason we decided to go there, of course.  One trip to the McDonalds was enough for us though since we haven’t seen the age of 18-25 for quite a few years!

Touring around the island we have seen more ancient ruins.  Knossos, the ancient Minoan palace, is the main attraction on Crete.  Thousands of people visit the partially restored site every day to ogle at the crumbling walls and what used to be palace.  But the Minoan civilization was a pinnacle in Greek history and its’ time was cut short by the evil volcanic eruption on neighboring Santorini.  As we said before, the power of Santorini’s eruption in 1600 BC caused the demise of an entire civilization.  That’s pretty impressive!

We’ve traveled to the south coast of Crete too (we are on the north coast with Aspen).  Desolate, arid and stark are good words for this southern coast.  Cresting the central mountain range that divides Crete into north and south we saw in the distance the deep blue Mediterranean Sea.  Only 5,000 feet nearly straight down the road switch-backed below us.  It was quite a ride down with occasional castles and deep gorges on either side of us.

At the base of the steep mountains are the beaches, small pieces of paradise for those who make the trip.  The climate is wonderful – no clouds, a gentle breeze every day and warm/hot temperatures with low humidity.  Perfect sun baking weather!

This south side of Crete was also where the major battles of WWII took place with the Germans fighting the Greeks, Brits, Australians and New Zealand forces for control of the island.  Germany easily won and took possession of Crete, the most important strategic island in the Mediterranean.  There are monuments all over Crete marking the valiant yet unsuccessful effort to defend Crete and defeat the Germans during the war.  One poignant monument was filled with the sun-bleached skulls of soldiers who became symbols for those pitched battles.

On a related note, it seems that Turkey is about ready to send a strong message (!) to Syria at the exact place we visited in April, Sanliurfa.  You might remember the nice picture of me pointing to the Syrian flag – that won’t be possible any more! 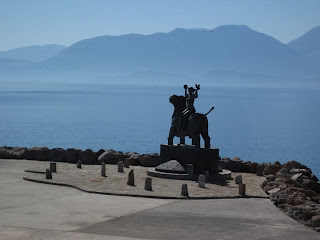 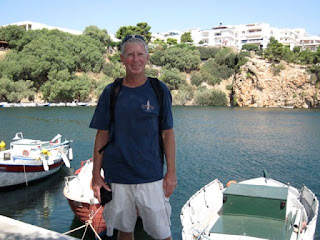 Captain Steve standing on the rim of a small caldera in Agios, Nikolaos, Crete that is supposed to be where Athena would bathe in the deep waters (213 feet deep!). 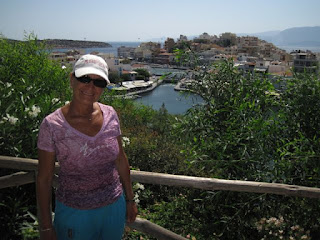 Maria high above the town and caldera of Agios Nikolaos, Crete 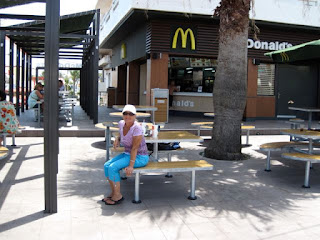 Yes, we found one!  It is in a town about 30 minutes from where we are. 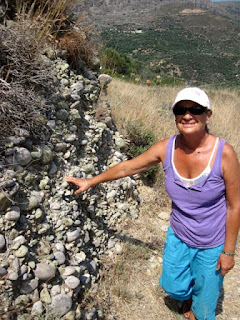 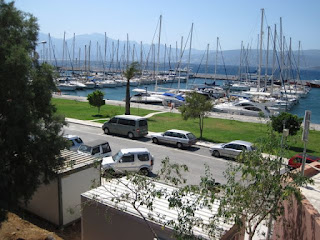 Agios Nikolaos Marina where Aspen is. 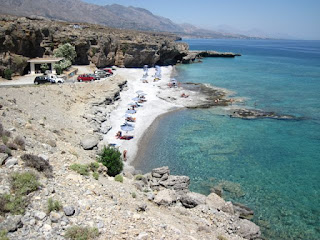 A nice beach on Crete! 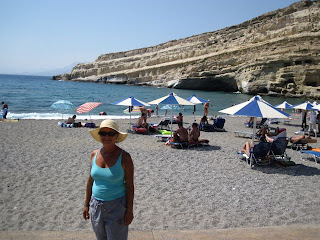 Another nice beach with some limestone outcrop in the distance. 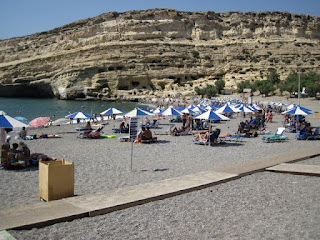 The caves behind the beach are where the Romans once lived in about 500 AD. 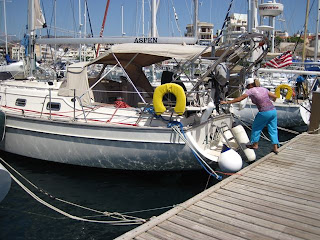 Admiral Maria making the leap from the dock to Aspen.  She hasn't missed yet! 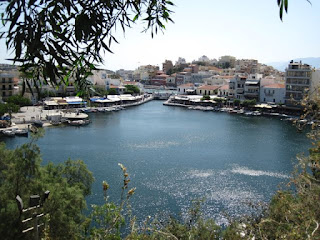 The setting for the town of Agios Nikolaos and Athena's bath

We are tied up in the marina at Agios Nikolaos Marina in Crete, enjoying the cloudless, warm and breezy days.  The temperature climbs into the high 80’s to low 90’s every day and then cools down to around 77 degrees at night with no humidity.  This is a really arid and stark place but very enjoyable.

We are lucky to have the cool nights because our air conditioning doesn’t work here because of the difference in power that we can get.  In Euro Land they use 220 volts and 50 Hz which is a LOT different than what we use back in the USA.  Because of that difference we still have power for our battery charger because it can use Euro power so everything else on Aspen works just fine.  Whew!

Greece is a land of so many contrasts.  As you know, they had the recent elections and 51% of the people decided to stay in Euro Land.  A lot of people decided not to vote because they knew the election was corrupt anyway, that is what they told us.  But at least there are no riots here in Crete and the people seem to like the tourist revenue.  We feel very welcome.

Crete became part of Greece only recently, in 1917 after Turkey lost control of it during WWI.  Yet this is purely Greek here with very little remaining of the Ottoman Empire.

The working hours in Greece are a mystery to us.  It seems that a worker might work 3 days a week, if that much.  They close all businesses at 1:30 pm and might re-open at 6 pm most days.  Some businesses just decide not to open in the evening at all.  Then everyone takes Wednesday afternoons off and Sunday all day of course.  So maybe 3 days of work is a stretch but it sounds good.  This work schedule doesn’t include all of the holidays and the fact that the country closes down for the entire month of August.  No wonder the country has financial problems!

The beaches are really nice and very busy.  We heard that in the US they were showing empty Greek beaches on the TV news lately.  Maybe the beaches are empty at 5 am but Steve sees people sunning themselves and even swimming at 6:00 am when he is running!  Everyone loves a good beach day here, even the locals it seems.

Greece doesn’t celebrate my birthday on the 4th of July for some strange reason.  But at least 1 hotel remembered and had a small fireworks display that we could see from Aspen.  That was nice of them!

This morning at 2:48 AM we had a nice 4.8 earthquake that was just to the southeast of Crete.  We didn’t feel a thing onboard Aspen and nothing seemed out of place in the town when we walked around today.  They are used to earthquakes here – if you remember the giant earthquake and eruption on the nearby island of Santorini?  That big one wiped out the Minoan civilization that existed on Crete in about 1600 BC.  That must have been a memorable event!

Sail on, sail on and sail safe Aspen…
Posted by Aspen at 7:30 PM No comments: