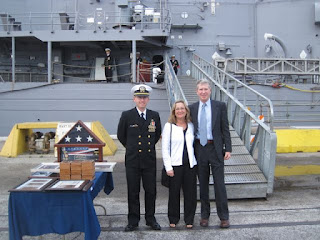 Captain Steve and Maria at the Decommissioning ceremony for the Stephen W. Groves at the U.S Navy base Mayport in Jacksonville, FL 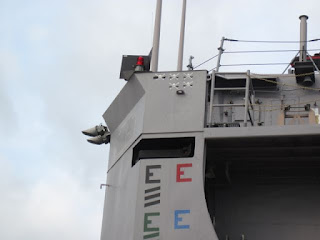 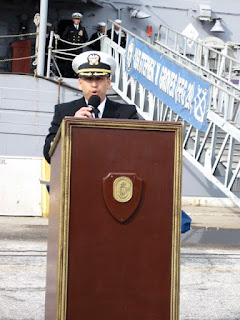 Today we attended a decommissioning ceremony in Jacksonville, Florida for the U.S. Navy guided missile carrier, Steven W. Groves, that we met in Salalah, Oman where we were anchored on Aspen last May.

The ship had successfully hunted Somali pirates in the Indian Ocean at the same time we were sailing from India, trying to make this dangerous area a safer place. 5 skull and crossbones were emblazoned prominently on the ship's bridge indicating how many pirate ships were sunk by this ship and crew.

Now it was time for the ship to be taken out of service and replaced by newer technology. We had no idea that stealth technology and star-wars type weapon systems have become common among the newer ships, rendering a lot of the older vessels obsolete. It was a fitting farewell for a proud ship!

Sail on, sail on and sail safe Aspen
Posted by Aspen at 2:34 AM No comments:

Phyllis and Maria in Fiji 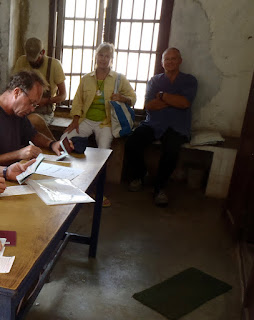 Jean and Scott clearing customs/immigration in Cochin, India
It was 1 year ago today that our friends onboard the sailboat Quest were murdered by Somali pirates while crossing the Indian Ocean with us from Mumbai, India to Salalah, Oman. May you rest in peace Phillis, Bob, Jean and Scott.
Posted by Aspen at 2:35 PM No comments: