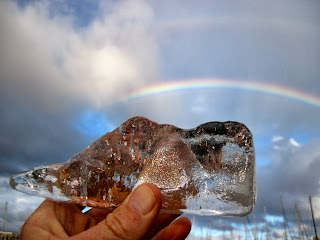 I returned the Rock of Gibraltar; the icon that was given to me by my fellow sailors when the 20 boats in the Blue Water Rally safely arrived in Marmaris, Turkey after surviving the piracy in the Indian Ocean.

Here is why I returned THE ROCK:

Fate brought us together as sailors.  Sailors who had a dream of sailing around the world on our own sailboats.

Together we overcame the constant challenges in the vast expanse of the unforgiving sea.

Our eyes have seen wonders that are hidden from ordinary people, yet lay before our bow each day that we sailed.

We have experienced the wonders of the world through the eyes of a sailor, of which we are now one.

Fate stepped in to create a tragic memory that will live with us forever.

The crystal Rock of Gibraltar has now completed the circumnavigation upon its' arrival back in Gibraltar, where this was sent from.

Please accept the return of this priceless sailing relic to commemorate the bond that we all share, together, as fellow sailors in the 2009-2011 Blue Water Rally.

Of course there are still members of the Rally who probably won't be going to Gibraltar because of their new route back to the northern hemisphere via South Africa.  So that point is up for discussion :)
Posted by Aspen at 10:23 AM